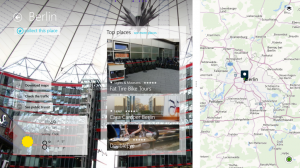 Nokia announced today that its Here Maps application will soon be available for all Windows 8.1 devices.

The app will be a free download from the Windows Store for laptops, tablets and PCs, and will start rolling out “in the coming days,” starting in North America and Europe. Previously, the company’s Windows 8.1 app was restricted to the Lumia 2520 tablet.

As should be expected from a tablet app, it’s possible to control Here Maps with a touchscreen, but users of standard PCs will be able to control the app with their keyboard and mouse. One of the key benefits of Nokia’s app is the ability to save city maps for offline use, so it’s possible to get directions even without an Internet connection.

The company also added support for high-resolution satellite imagery, which offers better detail than what had previously been available from Nokia.

It’s going to be facing some strong competition on Windows 8, though: Microsoft recently launched a preview version of its Bing Maps app for Windows 8.1 that added 3D maps of a number of cities worldwide.