The Uber for alcohol has arrived in Seattle.

Drizly is now operating in the Emerald City, offering a service that delivers beer, liquor and wine to your house within 40 minutes of ordering. 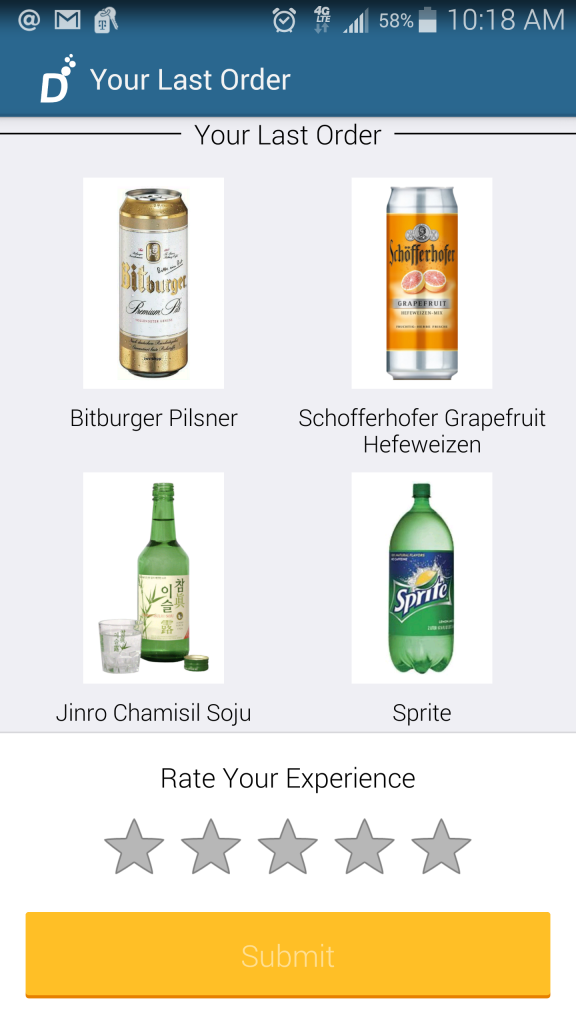 We tested out Drizly on Friday afternoon, and the process was pretty smooth. The app, available on iOS and Android, asks for your delivery location and matches you with the closest liquor store. Drizly partners with local, independent wine and spirit shops, who deliver the alcohol with their own employees.

The app has several filters — brand, country, etc. — allowing you to easily search for specific types of alcohol. We picked out five items:

Drizly does not mark up prices, so you pay what you would in the liquor store. Delivery fees vary from retailer-to-retailer — as does the minimum order amount, which was $20 for us this time — but most charge $5. We actually didn’t have to pay for the transportation fees this time around.

Just after submitting my order — you can pay with credit card or PayPal — I realized that I had set my delivery location as my home, instead of the office. Thankfully, Drizly had contact information for the liquor store, so I called and explained the problem. The employee asked for the new address and said he could still get me my booze. 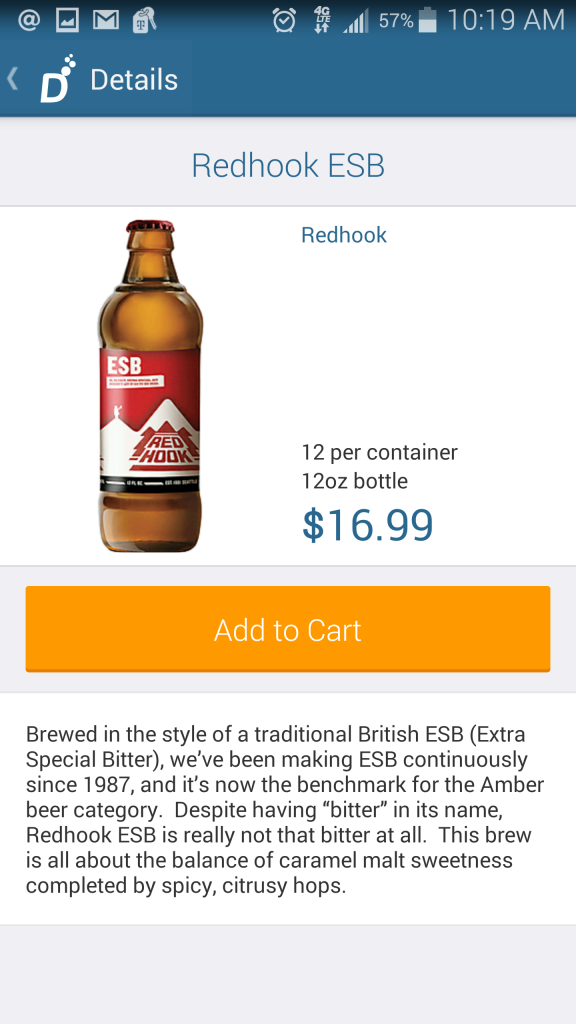 The app sent a text message about 20 minutes later, notifying me that my order was on the way. I could also track the driver through the app.

About 27 minutes later, Ben showed up at our door with two paper bags full of cold alcohol — awesome. He took my ID and scanned it with his Drizly-issued iPhone, using the company’s “forensic ID verification system.”

Ben explained how he liked the extra revenue and technology that Drizly offered. The company does not take a cut from each transaction; rather, it charges clients a monthly license fee based on factors like the value of the delivery zone served.

Drizly, which does not deliver to college campuses and can refuse service to those that appear too intoxicated, is live in eight other metros. Many states do not allow for liquor delivery, but Washington legalized the delivery of spirits in 2012.

Drizly faces competition from other alcohol delivery services in Seattle and giants like Amazon and Instacart, which deliver beer and wine in Washington but not spirits.

But Nick Rellas, who founded the company with fellow Boston College grad Justin Robinson in July 2012, said that he’s most worried about convincing people to opt for delivery over actually shopping at a physical liquor store. People are still wary of using an app versus going to a store where they already have a known set of buying expectations, he said.

“When we think about consumer behavior, it’s not a question of Amazon — it’s whether people can make that jump,” Rellas explained. “And we see that overwhelmingly, they are.”

Rellas said that “things are moving quickly for us,” and pegged the company’s growth at 25-to-50 percent month-over-month. He added that the average Drizly transaction generates five times the amount of profit for retailers than an average walk-in visit.

“We think we’re on to something,” Rellas said.

Drizly, which has raised almost $5 million and employs 27, is part of a growing number of startups that are using smartphones and logistics technology to improve delivery of everything from people to meals to groceries. Scott Stanford, co-founder Sherpa Ventures, noted this trend back in July when we interviewed the venture capitalist about his investment in food delivery startup Munchery.

“Consumer expectation has changed as a result of greater connectivity,” Stanford said. “When you think about what the Internet did to media and changed consumer expectation and requirements, the same thing is happening to commerce.”