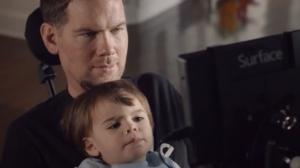 Former NFL player Steve Gleason never played in the Super Bowl, but he’ll be making an appearance on Sunday’s broadcast, as part of Microsoft’s first-ever national Super Bowl ad. (Yes, I was skeptical, too, but a Microsoft spokesman says the company has never before aired a national ad during the big game.)

Gleason is famous for a key blocked punt during the New Orleans Saints’ first home game after Hurricane Katrina. He has ALS, better known as Lou Gehrig’s Disease, and uses Microsoft’s Surface Pro tablet to run eye-tracking technology that allows him to speak via the computer.

He is one of several inspiring people whose use of Microsoft technology will be showcased in Microsoft’s Super Bowl ad during the game.

The ad will direct viewers to a site featuring videos telling the story of each person in more detail. The ad itself isn’t yet public, but the videos of Gleason and 5-year-old Braylon O’Neill are below. If these vignettes are any indication of the emotional power of the actual ad, fans of the Denver Broncos won’t be the only ones holding back tears during the game. (Sorry, couldn’t resist. Go Hawks!)

[Related Post: Comic: How the Seahawks could help Microsoft]

Update, Feb. 2: Here’s the commercial that will air today during the Super Bowl: