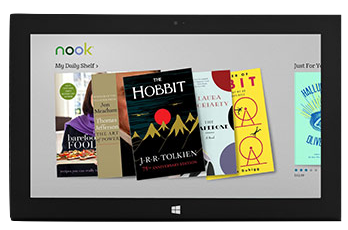 Microsoft’s partnership with Barnes & Noble officially unraveled this morning with the bookseller buying back the tech giant’s stake in its Nook e-reader business for $62.4 million in cash and 2.7 million Barnes & Noble shares, adding up to roughly $115 million based on the current share price.

The sale, outlined in this regulatory filing, translates into a $185 million loss on Microsoft’s original $300 million investment. However, the end of the deal also relieves Microsoft of obligations to make substantial future payments to cover operating expenses and content royalties.

“As the respective business strategies of each company evolved, we mutually agreed that it made sense to terminate the agreement,” a Microsoft spokesperson said via email.

The agreement was one of a series of strategic partnerships struck by Microsoft under previous CEO Steve Ballmer. Satya Nadella, who became Microsoft CEO nine months ago, has been pushing the company to focus on its core products and services.

It’s an underwhelming conclusion to a deal that made major headlines when it was announced in April 2012 as part of a patent settlement agreement between the companies. Microsoft and Barnes & Noble planned to create close ties between Windows and Nook, including the potential for a dedicated e-reader or Nook tablet based on the Microsoft platform.

Then, in June of this year, Barnes & Noble announced a co-branded Galaxy Tab 4 Nook tablet, developed in partnership with Samsung.

Barnes & Noble announced the termination of its Microsoft agreement in its earnings news release this morning. The Nook segment reported a decline of 41.3 percent in revenue, to $64 million — illustrating the bookstore chain’s struggle to compete with Amazon in the market for e-readers and digital books. Sales of Nook devices were down more than 63 percent, to $18.7 million, and sales of digital content were down more than 21 percent, to $45.2 million.