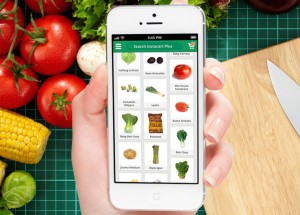 Portland folks now have a new way of ordering groceries to their door.

Grocery delivery service Instacart today launched in the Rose City, giving customers a way to get groceries delivered from Whole Foods, Costco, and Uwajimaya in an hour.

This is the 13th market for San Francisco-based Instacart, which plans on expanding to 17 cities by the end of the year. Bill Babeaux, Instacart’s Portland City Launcher, said that Portland had the most people requesting Instacart out of any major U.S. city that did not have the service.

“To choose the markets where Instacart will expand, we always conduct very thorough analysis,” Babeaux told GeekWire. “Thousands of data points are examined, but Portland excelled in many areas.”

Babeaux also noted Portland’s “strong tech and design industry,” and how the city is one of the fastest growing metros in the U.S.

“Portland also had some of the most favorable demographics of the cities considered in terms of urban density and young population,” he added.

Instacart, led by former Amazon software design engineer Apoorva Mehta, is going head-to-head with giants including Amazon and Google in the grocery delivery business that is disrupting a $600 billion industry. Instacart, though, takes a different approach from its competitors by contracting with “personal shoppers” who will run to the store to pick up your orders and drop them at your house.

The model is more along the lines of “sharing economy” companies like Uber and Airbnb, and Instacart says the lack of distribution infrastructure is a competitive advantage allowing it to expand quickly into new markets — two to three weeks to enter a market, versus six to nine months for rivals that rely on traditional distribution facilities, according to the company.

Instacart’s delivery fees vary depending on how fast you want your groceries delivered. It’s $3.99 for two hour delivery and $5.99 for one hour if you spend $35 or more; those prices go up by $4 for orders under $35.

The company will initially deliver across the Portland area, in addition to neighborhoods in Beaverton (full coverage map is here). Customers can combine items from multiple stores into one order, and do not need a store membership to order from Costco. Those who order today will receive a free month of deliveries via Instacart Express, which is the company’s $99/year annual membership that is similar to Amazon Prime and eliminates delivery fees.

Related: A tasty trend or a bubble? Why investors and entrepreneurs are so bullish on food delivery