Most retailers hate bad weather, which can keep packages from being delivered on-time, and stop customers from visiting stores.

Evo is praying for snow. The Seattle-based retailer, which specializes in ski and snowboard gear and apparel, sees its sales jump when the weather turns bad. “We are so weather-dependent,” says Chris Dickerson, the retailer’s retention marketing manager. “After a storm, we’ll definitely get a lift, whereas other marketers like to use it as an excuse.”

Living in the shadow of huge Seattle retailers like Amazon, Zulily, REI and Nordstrom, the 13-year-old Seattle company may not get very much attention, but it has quietly been carving out a name for itself — not just in its physical stores, but also online, where Evo gets 85 percent of its sales.

The profitable, privately held company does not disclose financial results, but Evo was willing to share with GeekWire a few details about its performance this holiday season on the retail industry’s two busiest days of the years: Black Friday and Cyber Monday.

The day after Thanksgiving, Evo’s sales soared 53 percent over 2013, to hit an all-time high, and the following Monday, records were broken again, when sales jumped 41 percent year-over-year, totaling $1.6 million for the day.

On Cyber Monday, each time Evo clocked another $100,000 in sales, the office celebrated by tooting an air horn. “It was a loud day,” recalls Dickerson, who talked to GeekWire at the company’s Fremont headquarters.

That weekend, instead of hitting the slopes, employees headed to Auburn, where Evo’s new 124,000-square-foot distribution center is located, to ship a record number of skis, poles, boots and warm winter jackets.

The retail business can be tricky. Even institutional brands like Best Buy and JCPenny can’t figure out how to reach customers at times. So how does a mid-sized retailer like Evo stay in the game?

A founder’s love for skiing

Much of it can be traced back to Evo’s founder, Bryce Phillips, a Roseberg, Ore., native who fell in love with skiing at the age of five.

For college, he attended Seattle Pacific University, where he bought and sold gear to buy lift tickets. At first, it was from his dorm room, and later it was at massive discount tent sales, or on eBay. At first, Evo was only a website, launching in 2001. Four years later, it also became a store, opening in an old Fremont warehouse. 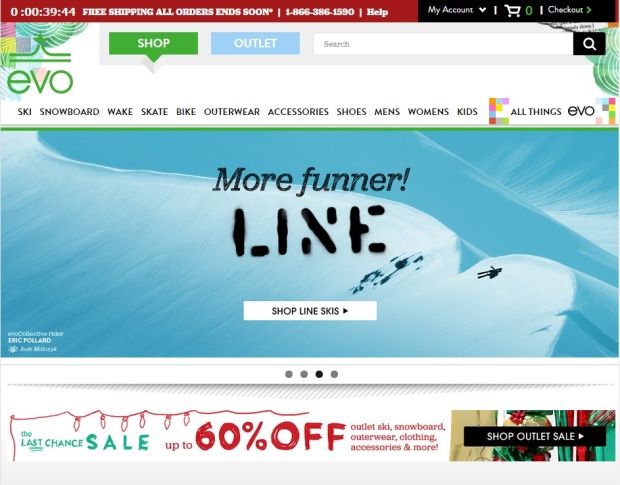 Phillips, who returned to Evo as CEO in 2013 after taking four years off to be a professional skier, injects his passion into both sides of the business, even though 85 percent of the company’s sales occur online. Despite that disparity, he strongly believes in having physical stores, too.

“It’s the heart and soul of our brand,” he said. “When you can understand how the two channels drive each other, it’s compelling,”

A year ago, Evo moved its flagship store from 36th Street in Fremont to a 10,000-square-foot warehouse on Stone Way, on the other side of the neighborhood. The store is almost more of a work of art than a center of commerce.

Besides selling ski and snowboard gear, Evo has added equipment for other action sports, like skateboarding and wakeboarding. The store is also designed to be a gathering spot, sporting two restaurants and Seattle’s only indoor skate park. All Together Skatepark hosts lessons and skate camps, and is open to drop-ins for a fee.

Evo opened a second store in Portland in the historic Salvation Army Building this October, replicating the funky community vibe. It also added new departments, such as commuter bikes and surfing.

“A lot of items that we sell are on Amazon, but [customers] come to us because they trust us; we have the information; and they like knowing that they are part of a community and being part of something,” Phillips said. “All of those different things create a competitive position in the market.”

A blending of virtual and physical

Evo tries hard to replicate the store’s look and feel online, where amazing photos dominate the front page, and there’s plenty of magazine-like content for sports enthusiasts. Some blog posts feature interviews with famous ski inventors, and another recent entry recapped Evo’s grand opening party in Portland. It bragged that it sold 1,174 tickets and people had to wait an average of 41 minutes in line. GZA, a hip-hop artist and member of the Wu-Tang Clan, made a short appearance onstage.

Evo plans to open additional stores in the future, but Phillips declined to say how many or where they will be located.

“We have a lot of upside on the Web, but we are also opening stores,” he said. “We have plans to turn on the gas on both fronts. We really need to make sure we are delivering something completely different, that’s super tied in and relevant to the community. You can’t be stamping them out. Every time you walk in, I want people to say, ‘oh my gosh, this is completely different than anything we’ve seen.'”

As for hitting new records on Back Friday and Cyber Monday, both Phillips and Dickerson have some guesses as to why they were such a success.

The company rolled out a brand new site in October that offered a responsive design for mobile devices; the site was load-tested and stood up to the heavy traffic, which was not always the case in years past. Additionally, the product mix and prices were what consumers wanted.

But Phillips offers another theory: the sales probably would have occurred anyway, but consumers today are programmed to buy on those peak shopping days. It’s a honest assessment, and not one many retailers would give.

“Retail is 6,000 moving parts,” he said. “There’s no silver bullet. All of those things did collide, and both retail stores crushed their records, too. But are these days just absorbing demand from other days? We can’t say for sure, but it’s not just fully incremental, it’s coming from a longer period,” he said.

In addition to opening new retail stores, and continuing to add more merchandise, like surf gear and bikes, the company has one more major move on the horizon: Its Seattle headquarters. Currently overlooking the Burke-Gilman Trail in Fremont, the Evo headquarters will be moving across the street in Fremont to its original retail building, which was abandoned recently after Makerhaus, a workshop for 3-D printing and other projects, went out of business.

The larger space will support and accommodate the company’s growing staff, which can peak at around 185 during the height of the season and average out at about 140, including its fulfillment center in Auburn.

What’s resoundingly clear is how far Evo has come since Phillips first started selling gear from his dorm room. Here he is telling the whole story in a video about the Portland store opening.