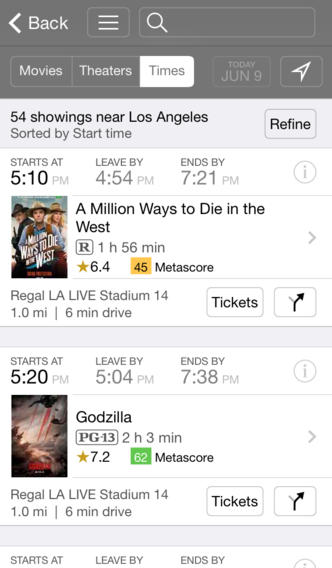 Amazon subsidiary IMDb, known for its giant compilation of Hollywood data, refreshed its apps for iOS and Android today, and announced that users on those mobile platforms have downloaded the company’s apps more than 100 million times.

iPhone and iPad users now get access to “Times,” a new feature that gives users the ability to browse showtimes and purchase tickets from movie theaters near them. In addition the app will tell users how long it will take to get to the theater, so that they can figure out if they can make it to a particular showtime.

Users who don’t have a particular movie in mind can tell the app to find tickets based on a variety of factors, including the movie’s genre, when they want to leave for the film, or when they want to be done watching.

Android users will now have access to new “Watch” icons, that will show users where and when they can view TV shows and movies that they’re interested in. The icons feature Amazon’s Prime Video service, as well as items that are available for purchase through Amazon. It’s a move that should help the Seattle-based retailer expand the reach of its streaming video offerings.

Android users will also be able to set “Favorite Theaters” inside the app, view showtimes, and purchase tickets right from their device.

The updates are a key evolution of a very successful part of IMDb’s platform. Since the biginning of the year, IMDb’s mobile website and apps have received an average of 300 million hits a month.

The IMDb Movies and TV app is available for free from the iOS App Store and Google Play Store.