In this corner: We have a young, innovative company that says it’s changing the playing field, and making life better for everyone through innovation. This company’s opponents say it isn’t playing fair.

In that corner: We have the government agency responsible for overseeing the playing field. The company’s opponents are calling on this agency to do something.

The battle: The young, innovative company says existing rules don’t apply because it’s a new playing field, regulation will stifle innovation, and the good of what it’s doing for consumers is self-evident. The government agency says it’s not a new playing field and that the company’s actions are causing harm and need to change.

The outcome: Despite a valiant effort by the young company (and its supporters), they lose and find they’re now clearly, permanently on a playing field overseen by the government agency — with their actions subject to scrutiny and regulation in some form from here on out. The company’s opponents don’t get all they want, but the government agency’s action helps them beat back the company, giving them time to adapt and regroup.

Given the attention being paid to the Seattle City Council’s cap on ridesharing companies like UberX, Sidecar and Lyft, you may think I’ve just outlined that story. To a degree I have. But I have also outlined the story of United States v. Microsoft Corp. with the role of the United States being played by the Seattle City Council, and that of Microsoft by the ridesharing companies. There are differences, but the similarities are important to understand because both of these cases show what happens when the fast-moving world of tech and innovation collides with the slow-moving world of legislation and regulation. And these cases show that while that the innovators naively believe they are outside those laws and regulations because of innovation (or above the laws because of arrogance, some would say), in the end they find they have no choice to but to accept they’re now part of a new, different game: the game of politics. Because the important lesson from these clashes is that the government will win. 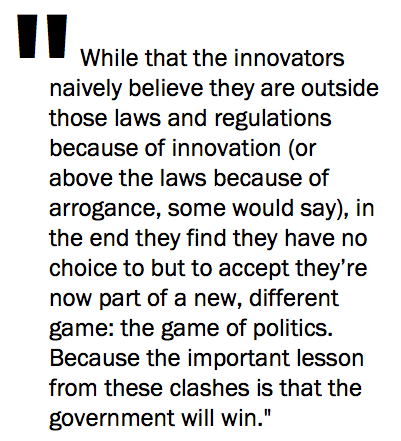 While I normally write on security and privacy, I also have some background in politics from before I got into tech. With that background and my career in technology, I have my own perspective on this collision of tech and politics. Specifically, I have my ideas as to why these kinds of collisions happen and why they’re fated to always end the way they do, when they do. What’s important to learn from these tales isn’t what went wrong for these companies, but what other young, innovative companies (i.e. startups) should do to prevent these collisions — because, like War Games, the only winning move is not to play.

The chief issue that underlies these collisions is the fundamental difference in outlook between business and government. Business is about money, government is about power. Money is logical and measured in numbers; power is emotional and measured in influence and respect.

Typically, young, innovative companies will view government as irrelevant to their project: they’re too focused on innovation, after all. If government does come knocking (and it doesn’t always), these companies view themselves as outside the government’s jurisdiction and figure it will go away. If the government doesn’t go away and the matter comes to a head, the companies will then tend to make arguments in support of what they do that are grounded in logic: their reasoning for why the rules in question don’t apply to them; how their innovation makes life better; and how their work is good for the economy.

These may be good arguments. But they don’t really matter because the company is pleading its case at the wrong time and in the wrong way. If these arguments are being made in the Seattle City Council chamber during a hearing or in a courtroom during a trial, they’ve already lost. These arguments are most effective when made to the people that have the power to initiate regulation or other restrictions before they actually act, in order to forestall them. You are looking to influence the process. And to do that, you have to have access, and show respect with that access.

When I watched the beginnings of the Microsoft antitrust trial, the thing that struck me most was how Microsoft was failing to try and gain access to those in power, engage them, give them the proper respect and try to build up influence. Some said it was Microsoft’s arrogance, and I can see that. But I also saw naiveté: a belief that the logic of business and technology was better than the emotion of government and power, and so would prevail. We know how that worked out. It was a miscalculation that almost ended Microsoft as a single company, certainly altered the future of the industry, and (I believe) ultimately drove Bill Gates out because of the toll it took on him.

How to succeed in politics (and business) 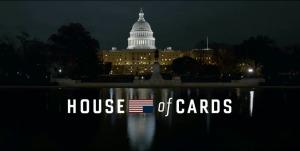 To understand what lies at the heart of this miscalculation, Netflix’s series House of Cards gives us a good example. Yes, it’s fiction, but it’s fiction that gets the operation of power very well in my opinion (one reason why it’s popular inside the Beltway). At one point, Frank Underwood, played by Kevin Spacey, remarks, “You may have all the money but I have the men with guns.” It’s a raw statement, but true. At its heart, power in government represents the ability to use the coercive power of the state. It’s why those in power look down on those who just pursue money, like in this House of Cards clip from season 1. No matter how logical your arguments are, those in power make the final decision for their own reasons, and they know it. It’s not just a matter of letting the facts speak for themselves; it’s a matter of making the facts speak for themselves in the most effective way.

Microsoft failed to appreciate this game and engage in it promptly if not proactively. When we look at ridesharing companies, we see they’re making the same mistake. They didn’t engage city councils proactively. And when they saw the first sign of trouble in San Francisco, they still failed to take action promptly. Failing to engage was a huge error in my opinion, since taxi services are highly regulated and so closely integrated with city government in all major cities. More than any other industry, ridesharing companies should have understood early on the importance of working with, rather than against, government. They didn’t, and now they’re forced to play a catch-up game.

It remains to be seen what happens with ridesharing companies. They didn’t lose entirely in Seattle, but the loss in Seattle will likely lead to losses in other cities as their opponents are emboldened. One of the likely signs that you’ll see that ridesharing companies have figured out they need to engage and play the game will be the formation of an industry association that can engage and lobby city councils and governments on their behalf. That’s a classic first step in finally waking up to the reality of the game. And the game of politics is never done, really. Years from now these companies may be in a position to try again from a better, stronger position of greater influence than they have now, and realize different results. One thing is sure for rideshare companies, though: they’re now firmly in this game for good.

The lesson from Microsoft and ridesharing companies for other young, innovative companies is a clear one. Understand the regulatory and legislative environment you’re operating in early, accept that you are (or will be) a part of it, and engage proactively and positively with the people who do have the guns in your industry. Do this especially if you have potential competitors who are already playing the game. Guess who those legislators and regulators are listening to today, if not to you?

It’s easy to decry this as a corrupt, antiquated system. But pragmatism is one area where business is better than government. Business people are good at accepting facts on the ground and dealing with them. And whether you agree with the game or not, it’s a reality.