It seems like everyone’s getting into the bulk food business these days.

Groupon announced today that it’s launching Groupon Basics, a service that allows customers to order certain household essentials in “warehouse sizes” and have those items delivered. At launch, interested consumers can select from a catalog of 108 items, including bars of Dove soap and bottles of Aveeno moisturizer. 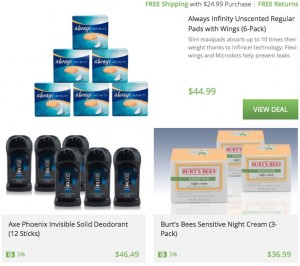 Basics, which is an extension of Groupon’s Goods retail site, is similar to Amazon’s Prime Pantry service, which the Seattle-based retailer launched last week. The major difference between the two offerings is size and selection: Amazon has many more items available in smaller quantities for people who don’t necessarily want to buy 12 sticks of deodorant or 24 bars of soap.

Groupon does plan to increase its selection, though, saying that it will “add to its assortment of household, personal care and health and wellness items as well as expand into grocery.”

Like Prime Pantry, Groupon Basics is only available in the continental United States. Unlike Amazon’s service, Groupon offers free shipping on orders worth $25 or more. To entice people to try the new service, Groupon is offering to give people a 5 percent of their order back in Groupon Bucks, which they can then use to buy more products through the site.

If Prime Pantry and Basics catch on, it could be a significant threat to bulk retailers like Costco and Sam’s Club, which require shoppers pay an annual fee in order to pick up warehouse goods at bargain prices. Just because of their sheer size, warehouse stores aren’t available in every neighborhood. That means these services could be a major competitor for people who find a drive to Costco hard to justify.

Chicago-based Groupon operates a large engineering and development office in Seattle — perhaps a good beachhead to poach employees from Costco and Amazon.