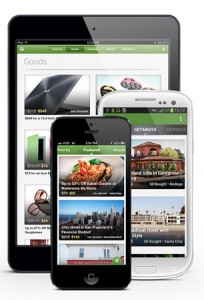 Two years after opening a Seattle office, Groupon is gearing up for another growth spurt.

The Chicago-based daily deals company currently employs 195 people here, and has plans to add another 75 positions to bring the total to 270.

Groupon spokeswoman Laura Roman tells GeekWire that in order to accommodate the burgeoning office, it has leased a third floor at the 505 Fifth Avenue South building in the International District neighborhood. Groupon will now occupy the third, sixth and second floor.

It’s the third satellite office in the past week that we’ve heard has significant growth plans in the area. Yesterday, HBO confirmed it was planning to double the size of its Seattle engineering office by the end of this year to roughly 110 employees. Additionally, a real estate source told us last week that Facebook is searching for about 80,000 to 90,000 square feet in downtown Seattle, or enough room for about 500 workers.

When Groupon first opened a small Seattle engineering office in May 2012, it had planned to hire between 20 and 30 engineers. But since then, it’s been successful at luring talent to the company, most notably from Amazon.

The Seattle office is being led by Vinayak Hegde, who prior to joining Groupon in 2012 worked at Amazon for 12 years. Another former Amazon hire is Robbie Schwietzer, who is SVP of operations. He previously worked at Amazon for a decade, most recently as VP of Amazon Prime.

“Seattle’s been great for us with a huge talent pool, and it’s becoming an even bigger part of the Groupon story,” Roman said.

Most of the new hires will be in engineering, Roman said. Some of the current job include openings are for mobile developers, data scientists and engineers for advertising and user-generated content. However, the bulk of the positions are focused on Groupon Goods, which sells everything from diamond rings to shower heads and NFL-brand coffee mugs.

The fairly new business has grown rapidly, racking up $243 million in revenue during the first quarter of this year alone.

The hires shouldn’t be a huge surprise given Amazon’s close proximity to the office. In one job description, Groupon calls for a product manager who has “vast experience in eCommerce and Process Automation.” In another job description, it explains just how seeking to “build a scalable and distributed platform to support Customer Experience, Buying Operations, Logistics and Supply Chain which will allow our buyers to bring the best deals to customers, allow customers to easily browse and discover our Goods and make a frictionless purchase.”