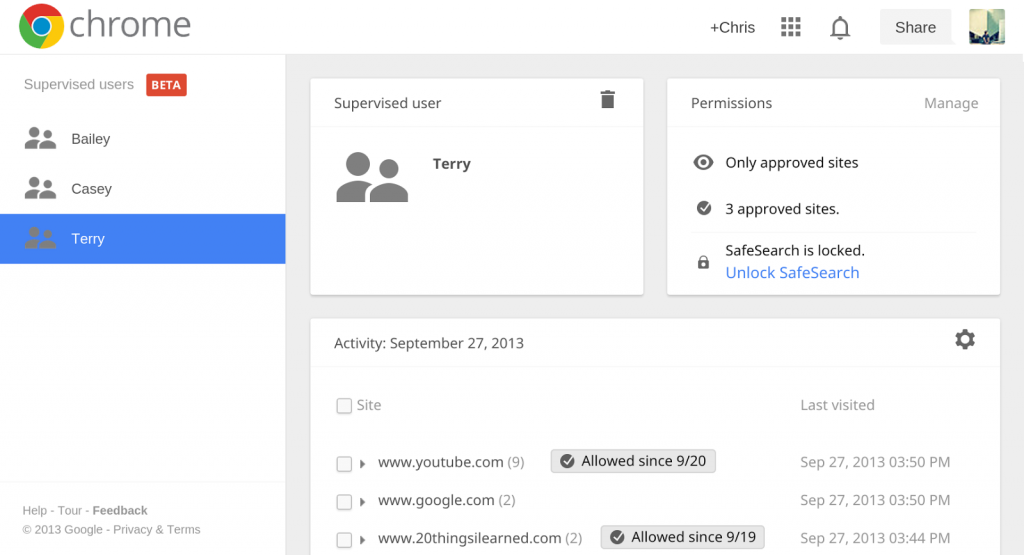 Google launched a massive update to its Chrome browser today, including a new feature that will let parents monitor their kids’ browsing habits from afar.

The feature, known as Supervised Users, is designed to help parents control and monitor access to the web for people who need some “guidance” online. Supervisors can create profiles in Chrome that log a user’s web history to a web management platform for review. In addition, the supervisor can also set blocked websites and lock SafeSearch on, and supervised users can’t install extensions or Chrome apps. Chromebook users have had access to the feature since October, but this is the first time that it’s made an appearance on other platforms.

For users concerned about someone using Chrome to spy on them without their knowledge, supervised users get a special theme in Chrome that identifies them as such.

In addition, tabs will now automatically inform users when they’re making noise or using the webcam, so that it’s easy to track down that YouTube video that suddenly started blasting power metal at an inopportune time. This was previously available to beta users, but now it’s being rolled out more broadly.

Google has also upped its malware protection in this release, automatically blocking files that the company has identified as up to no good.

To check out Google’s full release notes, click here. To get the update, which is available for Windows, Mac and Linux, go to chrome://chrome in Google’s browser, and it should check for updates automatically. Users can download a new version of Chrome here.