Crowdfunding is taking the entrepreneurial financing world by storm, changing the way everything from startups to art projects get funded. When traditional bank and VC financing leaves many entrepreneurs and projects high and dry, crowdfunding can bring in much-needed cash.

The majority of crowdfunding money raised today is on rewards-based platforms like Kickstarter and Indiegogo (a Version One portfolio company). With these sites, fans of a project typically get some kind of incentive, from a t-shirt to an early prototype, in return for their donation. In addition to rewards-based, the equity crowdfunding market is beginning to hit its stride with platforms like AngelList and CircleUp. Here investors receive a share of the company in exchange for funds.

By the end of this year, crowdfunding is projected to add more than $65 billion into the global economy, yet in many ways the market is still in its infancy.

As the space matures over the next few years, I expect three important trends to emerge:

While the mainstream players like Kickstarter and Indiegogo are generalist platforms for raising money, niche sites are springing up, targeting select markets. For example, there’s AppStori for mobile apps, MedStartr for healthcare, Petridish for science, Realty Mogul for real estate, and Pubslush for publishing.

The crowdfunding market is going to be full of specialized players that serve particular market segments very well. These platforms will emerge in those sectors where the funding gap is significant or projects fail to gain attention on a generalist site. 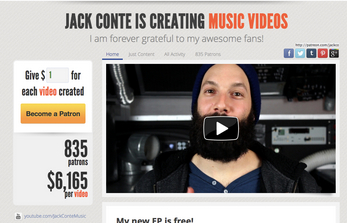 Today’s standard crowdfunding model involves a one-time fund drive for a particular project, milestone, or cut-off point. This approach works well in certain situations, such as a hardware startup looking for seed money to build a prototype and demonstrate market interest. Then successful crowd-funded hardware projects often go on to receive VC funding to build their business.

However, the one-and-done model doesn’t work for everyone.

Crowdfunding campaigns are expensive to organize and promote, and not all projects are designed to be self-sustaining when complete. New crowdfunding sites provide an ongoing pipeline of support. For example, Patreon lets people support their favorite artists, rather than backing a single film or art installment.

With millions upon millions of crowdfunding opportunities out there, it’s difficult for people to choose what to support or invest in. This is particularly true as equity-based crowdfunding success stories spread across the mainstream media and the general public wants in on the action, but doesn’t necessarily have the time or inclination to research and review pitches made by each new start-up.

As a result, we should expect to see more funds pop up that aggregate multiple causes or investment opportunities. Earlier this year, UK’s crowdfunding platform Crowdcube launched an actively managed fund for early-stage businesses and AngelList members can invest in syndicates. Funds aren’t just for investors, however. Donors at the charitable giving platform HandUp (a Version One portfolio company) can now donate to a general SF Fund, rather than choose a specific member to support.

Crowdfunding may have entered the mainstream consciousness through projects like the Pebble Smartwatch or Oculus Rift gaming headset. However, crowdfunding platforms can have much larger applications than just bankrolling the latest iPad accessory or album from an up-and-coming artist. As the crowdfunding market grows, entrepreneurs and platforms will continue to explore how to use the model in other ways.

We may discover crowdfunding to be a more efficient way to connect the people that give money with the people that need money. Funding of local public services like parks and road repair is one example, as is funding for major expenses like college tuition and fertility treatments. Wherever there is a gap in traditional financing options, a crowdfunding model will attempt to fill the void.

While it is interesting to watch crowdfunding evolve into new areas, it’s important to note that each crowdfunding site must develop a proper gatekeeper mechanism to ensure that the money is distributed efficiently and that contributors get what they have been giving for.

A few high profile failures or scandals can turn the general public away from the concept.

Boris Wertz is the founder of Version One Ventures, and has invested in over 50 early-stage consumer and enterprise companies, including Edmodo, Flurry, Indiegogo, and Wattpad. Follow him on his blog and on Twitter @bwertz.