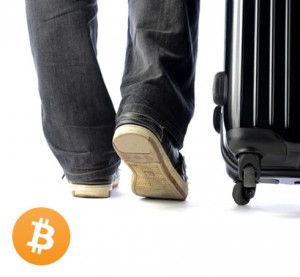 Bitcoin users looking for a place to stay while traveling now have a whole bunch of new options.

Expedia says it will now start accepting Bitcoin payments for hotel reservations, so people who have the cryptocurrency will be able to reserve rooms from hotels around the world without converting their currency.

The new feature is made possible by a partnership between Expedia and Coinbase, a popular Bitcoin exchange. At the time a customer makes a reservation and chooses to pay in Bitcoin, they’ll be sent to Coinbase’s site to make a payment. Once there, customers will be charged an amount of Bitcoin based on the exchange rate between the price of their room in the hotel’s local currency and the current price of Bitcoin.

In other words, if a hotel room in San Francisco cost $100 a night, users would be charged an appropriate amount of Bitcoin, based on the exchange rate at the instant they choose to pay.

Expedia’s hotel partners won’t notice much of a difference. Expedia will get money from Coinbase, and will then pay hotels in their local currency, just like the company would in any similar situation.

“In many ways, we view this as a way to empower customers to transact how they choose to transact,” said Michael Gulmann, Expedia’s Vice President of Global Product, in an interview with GeekWire.

Customers who want to use Bitcoin to remain anonymous will probably be disappointed. Users are still required to provide a name on their reservation, and hotels may require visitors to provide a valid photo ID that matches that name, depending on local laws.

Today’s move is a clear attempt to draw Bitcoin users to Expedia, which bills itself as the “world’s largest travel site,” over a competitor like Priceline or Kayak. But Expedia says it’s also a win for hoteliers.

A smattering of hotels around the world already accept the cryptocurrency, but it’s not a widespread practice. Implementing Bitcoin transactions can seem like a daunting and confusing task, and this move makes it possible for hotels to worry about what they’re good at without having to implement a new way of processing payments.

Expedia’s decision to offer Bitcoin users another place to spend their digital cash is also good news for the cryptocurrency. Right now, it can be hard to use Bitcoin in many settings, unlike using more traditional currencies. The more places that transact in Bitcoin, the more likely that use of the cryptocurrency will increase.

Expedia is hardly the first company to attempt to set itself apart by accepting Bitcoin. Amazon competitor Overstock.com started accepting the cryptocurrency at checkout earlier this year, and said in March that it is making between $20,000 and $30,000 each day in Bitcoin transactions.

Gulmann doesn’t expect Bitcoin transactions to make up a huge amount of Expedia’s total sales, but he said the company wants to make sure it’s in on the ground floor.

“We’ve seen a growing usage of Bitcoin. It’s still relatively small, but we expect to grow along with it,” he said.

What’s more, this Bitcoin payment experiment could grow to encompass Expedia’s other businesses, like airline reservations, if the hotel rollout goes well.

“The biggest question is really just around when we’ll start expanding to other lines of business, and it really all depends on how well it goes with hotels,” Gulmann said.