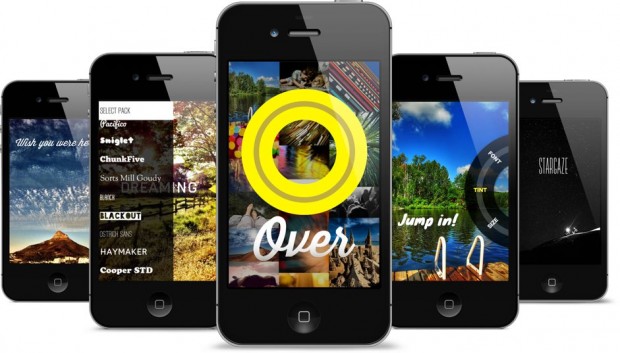 Starting today, Expedia’s iPhone app will become a destination for consumers to discover new apps — and then, download them for free — without any purchase necessary.

Through a partnership with Apple, Expedia plans to recommend a new application every month for download, much like the Starbucks app, which also doles out free songs and apps away on a weekly basis.

Expedia’s first freebie in what it is calling the “Media Lounge,” will be Over, a photography application which allows users to add text and artwork to photos and then share the images on Instagram or other social networks. It normally costs $1.99.

John Kim, Expedia’s SVP of global products, said when people are traveling, they are very curious bout what apps they should download, but since people don’t always travel regularly, they don’t know if they want to pay for something.”

“That got Expedia to asking the question, ‘what if we could curate the apps, and make them available for free’,” he said. Last year, Expedia launched a similar campaign in Europe, where Apple took notice of the program.

“Apple loved it,” Kim said, “We’ve been working with them to curate the apps and give them away for free.” 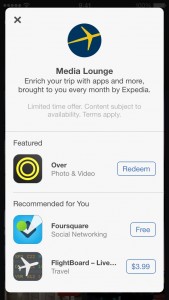 For Expedia and Starbucks, the app recommendations provide an excuse for consumers to stay engaged in the Expedia and Starbucks apps, even when not booking a flight or hotel room, or paying for a latte. On the other hand, for developers, it can mean getting in front of thousands of engaged mobile users, who may not normally troll the App Store for downloads.

Kim said initially Expedia will focus on travel-related apps, however, there’s a wide range of content that could be relevant in the category, including games and transportation. Besides providing one app for free, Expedia will also list other recommendations, for example, Uber and Foursquare.

The concept falls in lines with Expedia’s efforts to make traveling easier, Kim said. Other features launched recently, which will be rolling out internationally soon include: Scratchpad, which stores all of a customer’s searches when logged on to a mobile device or PC and saves them for viewing later; and new itinerary features, which allows friends and family to get alerts when a flight is delayed or has landed.