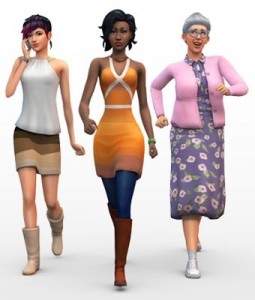 Amazing new graphics and head-splitting soundtracks are usually the focus at E3, the annual game conference in Los Angeles, where attendees consider earplugs a mandatory accessory.

But today, Electronic Arts showed off a softer side of the business, by announcing two titles that will try to appeal to another one of our senses: Our emotions.

The first title to get an warm and fuzzy makeover is The Sims 4, which simulates daily life, by enabling role-playing scenarios through virtual characters. Adding an emotional element may not be a huge leap since the game is about interacting with other people, but with this version, EA takes it to another level by letting players “control the mind, body, and now the heart of these new Sims.”

During today’s presentation, Rachel Franklin, VP and Executive Producer for The Sims 4, said you control their “hearts for the first time.” For instance, your character could be ambitious, outgoing, a perfectionist, clumsy, or a” hot-headed athlete, who loves literature,” or “a nature-lover with a touch of insanity.”

In Franklin’s wacky examples, the outcome of playing with emotions ends up being a steroid-popping muscle man, who can die from laughing too hard, or an elderly old woman who beats the same man up for not enjoying his poetry.

In Polygon’s game preview, it calls the “deepening forays into the fraught world of emotions,” the key to the franchise, and “to fully enjoy being a Sim, the player must be able to connect with the Sim as if it were a human being, rather than merely a digital doll. Paradoxically, this means that they have emotional lives independent of you, the player.”

The Sims 4 will be available for the PC, starting Sept. 2 in North America.

The other new title to receive a dose of feelings is FIFA 15, the company’s insanely popular soccer title. Thanks to a new technical innovation EA calls “Emotional Intelligence,” FIFA 15 can model “the emotional state of all 22 players on the pitch, giving fans a chance to experience first-hand the attitudes and personalities of the world’s best football players during a match.”

The players can show a range of emotions based on interactions with opponents and teammates — frustration after missed passes and anger with hard tackles. EA has developed 600 reaction animations, but so far none of them includes dying from laughter (at least not that we know of).

“We want our fans to feel the highs and lows of the drama that is football, and experience the emotional rollercoaster that plays out during a match,” said David Rutter, Executive Producer at EA Sports. “We’re now able to immerse you in the game and let the story of the match unfold based on new commentary, crowd activity, and the natural reactions of the players, which make every game unique.

FIFA 15 will release worldwide in September on PC, Xbox One and the PlayStation 4, and is currently available for preorder.

But if guns and explosions are your preference, EA had plenty of that, too.

Today, it released a limited beta of Battlefield Hardline, with a cops and robbers theme, and the Redwood City, Calif.-based company also teased the forthcoming Star Wars, which was designed using actual props from the movies. It will come out in 2015.