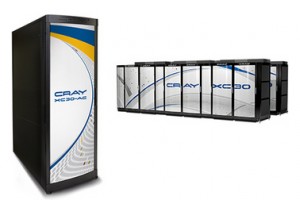 Cray announced today that it will provide the Tata Institute for Fundamental Research in Mumbai with one of its XC30 supercomputers – the first of its kind in India.

The XC30 will be outfitted with with Intel Xeon “Ivy Bridge” processors, and Nvidia Tesla K20X GPU accelerators. With that equipment, the system has a peak performance of more than 730 teraflops. Cray says that it plans to deliver and install the unit to TIFR this year. The financial details of this deal were not disclosed.

This deal is the third Cray has announced in the past two months. Last week, the company revealed that it has a $174 million contract to deliver a next-generation XC supercomputer, code named “Trinity,” to the National Nuclear Security Administration. In June, the company announced a deal to provide a pair of supercomputers to the Korea Meteorological Association.

The company also announced yesterday that CTO Bill Blake and Arvind Parsnarathy, the Vice President and General Manager of Cray-owned YarcData, have left the company to pursue “entrepreneurial opportunities.

Cray’s shares were up four percent today giving the company a market value of $1.27 billion. Shares are up 13 percent so far this year.