Most of us in the technology industry are aware of a problem that’s currently plaguing the youth of America: Computer programs, video games and mobile apps.

But it’s not that kids are spending too much time glued to these technologies (we can talk about that issue later). It’s that they are not learning how to make them. The staggering statistics tell the story: Nine out of 10 schools in the U.S. don’t offer computer science education and half of U.S. states don’t allow computer science to be counted toward math or science requirements.

I have the privilege of being the mother of two boys, ages 9 and 11. I’m also a serial entrepreneur and currently the chief revenue officer of Manzama, a venture-backed software company in Bend, Ore. — a small town with an entrepreneurial scene that is starting to garner some big attention. (See: Can Bend become the next Boulder? One venture capitalist thinks so, and here’s why on GeekWire and “Why Bend, Oregon is the next big city for entrepreneurship?” in Entrepreneur Magazine).

Even with that attention, our community struggles to find developer talent as much as — if not more — than employers in Seattle and other big tech hubs.

This problem has many facets that can be addressed by both short and long-term solutions. I’m keenly interested in helping create a community that sustains tech and startups, so I decided to tackle the latter. I embarked on a mission to help grow more of our own developers right here in Bend — which tuned out be harder than I imagined.

First, I realized we have no classes for young kids to learn to code. My own attempt to teach my kids about coding using websites was a massive fail. So I employed hope as a strategy, and waited for someone to do something. That hope came after watching an inspiring video from Code.org make the rounds in social media. While I was thrilled to see what they were up to, I also realized that Bend was likely not even on their radar.

And, let’s be honest — it was a little selfish of me.

If my kids are going to support me in a lifestyle I’d like to become accustomed to in the not-to-distant future, they’re going to need to know how to code. So, I decided to be the someone to do something.

Code.org has done an excellent job de-mystifying computer science, and creating programs that can be easily adapted into the classroom. They even offer cash incentives for teachers to implement. Cold hard cash. I sent this information to my kid’s teachers, with the hopes that they would implement the curriculum in their classes — and the vision of my children becoming the coding masters of tomorrow would become a reality.

While the teachers thought this was important, they don’t have the time or resources to manage another program — let alone a program that teaches a language most elementary school teachers don’t speak. So here’s what I did next. I posted this message on Facebook: 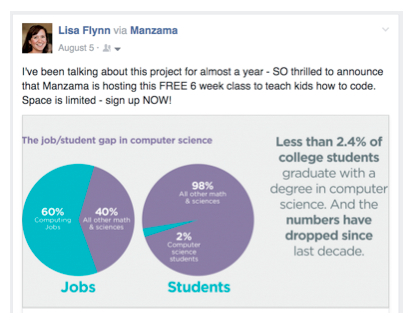 We started a computer science class at my company for kids between the ages of eight and 12. We had 10 spaces available, and filled the first seat less than one minute after we posted the announcement of the classes.

Within 24 hours, we had nearly 100 kids sign up. The elation of the overwhelming response turned to determination to make sure that every kid who wanted to learn to code could do so — for free. 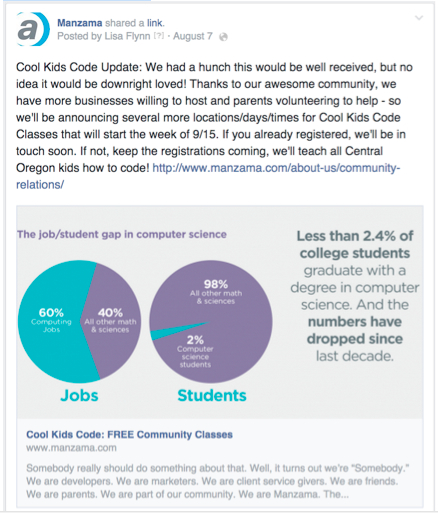 Armed with the knowledge that entrepreneurs can make quick decisions, I took what was perceived as an education problem and re-framed it as a community problem. With the full support of my company, we took that problem to locally-owned businesses with the proposed solution to host these free community classes in their coffee shops, conference rooms and retail stores. 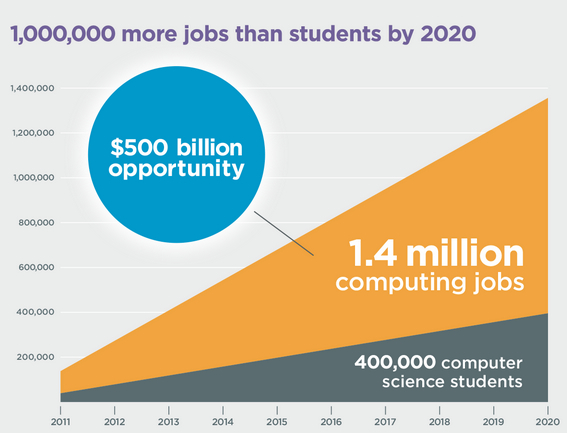 They all said yes.

Once we realized it truly wasn’t necessary to know how to code to teach a class, we started asking for parent volunteers. Plus, other members of the business community joined the charge by offering donations in the form of printing materials, use of space, computers and donuts. (We compared the binary 1s and 0s to bacon and donuts, obviously.)

As we started to place kids in classes, we realized that our little project had grown up quickly and now demanded attention and time. We didn’t want the pesky little fact that we all had actual jobs to stand in the way of its potential. So, when Camp Fire Central Oregon, a local non-profit, approached us offering to administer the program, we jumped at the chance.

But, we had one string attached.

Code.org doesn’t charge for their curriculum. Because of this, we felt pretty strongly that the coding classes should be offered for free.

Yet, we understand there are costs involved in the administration of a program like this. So I committed to raise the money to cover the administration costs of approximately $10,000 per year. I have soft-circled $5,000 so far, and I am going to rely on the generosity of the tech community in Bend to fund the rest of this education.

This community movement continues to grow. Three public schools in Central Oregon are implementing the Code.org curriculum this year!

It’s going to take a village to prepare our kids for a future where the landscape and resulting paradigm are moving at the speed of light. My hope is that our story will encourage others to view this problem through a different lens —one that helps you see how you can make a difference in your community.

At the end of the day, this is not just a problem for parents (who prefer their kid lands a good job out of college) or the tech industry (who are now paying signing bonuses to the best developers as they matriculate into the workforce – and that’s in addition to a substantially higher salary than their non-computer science graduate counterparts.)

It’s a problem for all of us. But the good news is that we have the resources to collectively do something about it.

Lisa Flynn is the chief revenue officer at Manzama, a startup company based in Bend, Oregon.