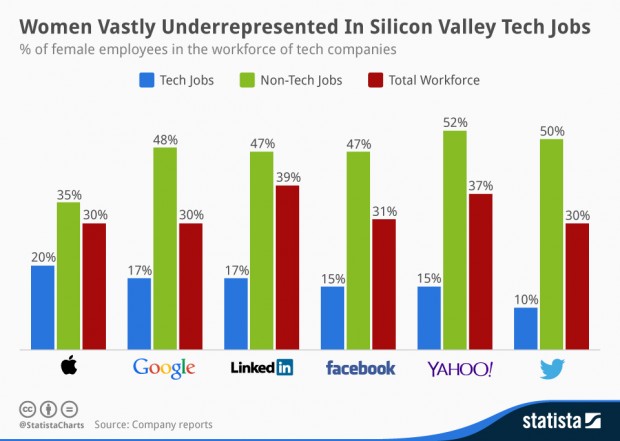 Looking over the diversity data released by major tech companies over the past several months paints a bleak picture of gender equality in the tech industry, as illustrated by this chart from Statista.

Microsoft was not included in the above chart because it did not release data that provides a breakdown between technical and non-technical employees. However, its most recent report said that the company’s overall workforce was only 28 percent women. Amazon has not yet released a diversity report.

It’s easy to pin the lack of representation on a problem with the tech industry’s pipeline, but that belies the fact that women leave science, engineering and technical fields at a rate much higher than men. A 2011 study found that 15 percent of women who graduated with an engineering degree did not go on to work in engineering, while another 20 percent entered the engineering workforce and then summarily left for another industry.

“There isn’t a simple solution to this,” said Sarah Bird, the CEO of Moz, addressing a question about the gender gap during a Seattle Rotary panel this week. “If there was, we would have figured it out, because there’s definitely a will.”

Madrona Venture Group principal Julie Sandler, who started the Seattle Entrepreneurial Women’s Network, said computer science needs to be treated on par with math and science in schools, not just as an elective, but as a mandatory class alongside other science courses.

“If it becomes something that both boys and girls at young ages are expected to know and take an interest in, you’re going to address some of the cultural obstacles that a lot of girls face to pursue fields that are still considered kinda geeky,” Sandler said. “It should be a norm.”

Bird cited programs such as Ada Developers Academy as an example of efforts to close the gap, and Sandler pointed to the work of code.org as another important initiative.

A Harvard Business School study on women in the science, engineering and technology workforce found that 56 percent of women left the tech industry. Many of those women went on to seek employment elsewhere, citing extreme work environments, hostile macho cultures and a lack of compensation as the primary reasons for their departure.

The companies that released diversity data usually did so with some pledge to do better in the future. Let’s hope they follow through.