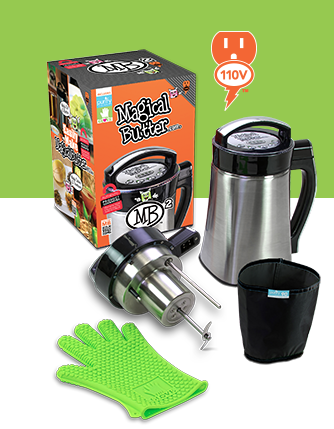 Garyn Angel learned a simple lesson while working in the finance world for 14 years: The easiest way to ensure success in business is to solve a problem. And that’s exactly what the entrepreneur is doing with his startup that manufactures an appliance that helps people make pot-infused edibles.

Angel is CEO and founder of Magical Butter, a young but already-successful company with its headquarters in a Seattle warehouse that hosted the first-ever Cannabis Tech Meetup on Monday night.

It’s one of many new marijuana businesses emerging in Washington state, where any adult 21 and over will be able to purchase recreational marijuana as soon as next week. However, the state will not yet allow stores to sell marijuana-infused edibles — which is exactly what the Magical Butter is built for.

The machine was born when a friend of Angel’s who had Crohn’s disease mentioned how he was trying to make edibles with THC — the active ingredient in marijuana — but was unsuccessful.

“We tried to figure out a better way for him to do it,” said Angel, who was running a financial planning practice in Florida at the time. “We kept going and going until we had a better mouse trap, and eventually came up with a great way to do it.”

The device mimics a large coffee pot and uses simple technology to create an easy and efficient way for people to infuse their fats, oils and butters with marijuana (or other plant extractions). Inside is a stainless steel blender and digital sensors, which are connected to automatic microprocessor-controlled program sequences that require two button-presses to create infused butter and oil in 90 percent less time than traditional cooking methods.

Angel said that the $175 machine “sells out frequently,” and that a majority of customers are over 55 years old who are looking to consume marijuana for medicinal purposes.

“I think those are people that are most interested in reducing their pill intake,” he said.

The next version of the machine will be bluetooth-enabled to allow users to upload and download their favorite recipes from the cloud straight to the device. The company, which has been bootstrapped to this point, is also preparing to raise a capital round to meet the demand from customers.

But Magical Butter, which has more than 130,000 likes on its Facebook page, is much more than just one machine. The company’s Seattle warehouse — also known as Magical Butter Studios — is not only a retail location, but serves as home to a handful of marijuana-related organizations like the Washington Marijuana Business Association and the Coalition for Cannabis Standards and Ethics. It also hosts events like Monday’s meetup and has a kitchen.

‘We want to be an epicenter for the cannabis community,” said Jeremy Cooper, a chef and director of West Coast operations for Magical Butter.

Magical Butter is also set to to serve pot-infused dishes like pork sandwiches and tomato soup out of its “Samich” food truck, which is parked outside of the warehouse and already made its debut in Denver.

You may soon see the Samich — which stands for “Savory Accessible Marijuana Infused Culinary Happiness” — rolling around in Seattle. But because of the state’s current restrictions on marijuana-infused edibles, it looks like the Samich will have to wait before selling its food.