Ever since Nintendo posted its first annual net loss in early 2012, the Japanese gaming company (whose North American headquarters is right here in Redmond) has seen a steady decline in its fortunes. Earlier this year Nintendo announced a $228 million loss for 2013, and last week the company revealed it will be closing their European headquarters in Germany, laying off 130.

Although these operating losses and cutbacks are a recent development, sales of Nintendo home consoles have actually been shrinking ever since the days of the NES in the ’80s. The Wii was a dramatic fluke in a decades-long decline: 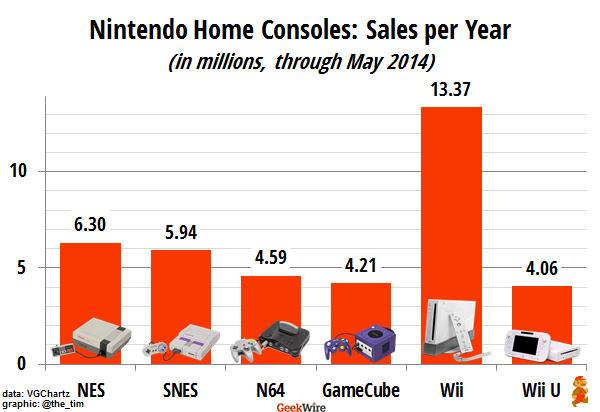 With just shy of 62 million sales in its nearly ten-year lifetime, the Nintendo Entertainment System held the title of best-selling Nintendo home console through four generations. The Super Nintendo, Nintendo 64, and GameCube all failed to live up to the glory of the NES. That all changed with the release of the Wii in 2006. With its unique motion controls and approachable library of games, the Wii very nearly sold more than the combined total of all three of the consoles that preceded it.

While the Wii U is off to a slow start, it’s not actually selling that much slower than the GameCube, which was making Nintendo plenty of money. In terms of raw sales, Nintendo doesn’t need another Wii, it just needs the Wii U to inch past the GameCube.

When it comes to handhelds, the 3DS is actually their second-best-selling system: 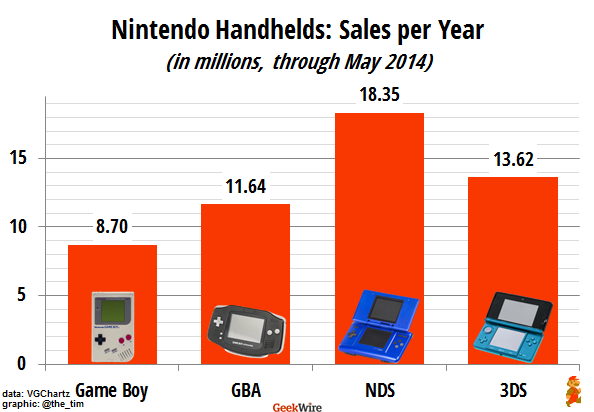 There has been a near non-stop flood of articles in the gaming press this year lamenting Nintendo’s mounting financial losses, and no shortage of turnaround suggestions from the peanut gallery…

Today at E3 we get to see if Nintendo has a plan of their own to reverse the tide. Will they announce something dramatic like a cross-platform gaming subscription service for all their legacy titles (i.e. the “Netflix of classic Nintendo games”), or will their E3 presentation be more of the same little incremental moves?

My opinion as a Nintendo fan since the glory days of the NES? Nintendo should focus on what they have always done better than anyone: making awesome games.

With Mario Kart 8, Donkey Kong Country: Tropical Freeze, Super Mario 3D World, Pikmin 3, and upcoming titles like Yarn Yoshi and Super Smash Bros., the Wii U is finally starting to build an enticing library. The release of Mario Kart 8 shot sales of the Wii U up from 31 thousand the previous week to over 187 thousand last week. A few more “system-sellers” like that could be all that it takes to get them back on track.

Nintendo will almost certainly never sell as many Wii U consoles as they did of the Wii, but they don’t need to. They just need to make enough great games to get back into the black so they can continue to make even more great games for many years to come.