[Editor’s Note: Author and teacher Jon Bell is a designer in Twitter’s Seattle office and a speaker at the upcoming HIVE technology design conference.]

While it’s true that creativity and inspiration can be hard to explain, quantify, or reliably trigger, there are some things we do know.

First, creativity requires headspace. Think of your favorite novel, painting, movie, or album. None of them were made in a noisy bar, at a whiteboard, during a roadtrip, watching TV, or hitting reload on Facebook. They required hours of effort that from the outside looks a lot more like studying for a test than the image we get when we think of collaboration.

Second, no one is an island, especially not when designing complex product experiences. Yes, there is a time to put your head down and produce. But getting to that point often requires collaboration, iteration, and a ton of dead-ends. Even someone who writes a book is still running the ideas by friends, family, their editors, and so on.

I think the latter is well understood. Steve Jobs once famously compared product design to a rock tumbler, where ordinary ideas get polished and refined through a long process of everything colliding and bumping into each other. And it’s why “open studios” are all the rage. Designers love open space! They need to collaborate! The more white boards, the better! Right? 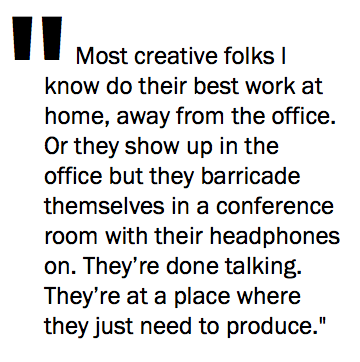 Well, sort of. In my experience, we’ve over-indexed on collaboration. We’re not giving ourselves nearly enough time to think. To produce. To take all the wonderful conversations we’re absorbing at the studio, on Twitter, from inspirational design sites, blog posts, and the like and actually do anything with them.

Most creative folks I know do their best work at home, away from the office. Or they show up in the office but they barricade themselves in a conference room with their headphones on. They’re done talking. They’re at a place where they just need to produce. We’ve all been there, and if you’re like me, it doesn’t last long. You get sucked back onto a discussion on the web, or someone comes and finds you, or it’s lunch time, or some fire drill pops up that you have to address.

On my teams, I implement something called “braiding”. The idea is that the team brainstorm is made better by people working on their own first. And then the brainstorm gives us some interesting ideas to go push forward. It’s doubly useful if you have someone who can prototype, because you can go from crazy whiteboard ideas, to someone throwing together a rough prototype, to everyone seeing the working example, sometimes all within the same day.

“Collaboration” has gotten a lot of press lately, and I’d never argue that it’s not useful. However, I do wonder if we’ve gone a bit too far. It’s not about collaborating less, it’s about collaborating at the right times. Find ways to braid your time and you’ll get a lot more out of both your meetings and your focused time.

Jon Bell is an author, a teacher, and a designer who has worked at frog design, Windows Phone, and is now the first designer in Twitter’s Seattle office. He runs UX Launchpad, a hands-on, one-day, fun design course. He is one of the speakers at the upcoming HIVE technology design conference, June 20 and 21 in Seattle. Tickets available here.]