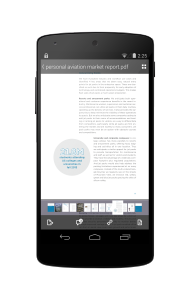 Box announced today a redesigned Android app with a handful of new features designed to give people on Google’s platform a new way to access the files they have stored on the service.

The update brings a new image gallery to Box’s app, which allows users to scroll through thumbnails of the photos they have stored on the service, rather than having to page through each shot on a list of files. The update also includes a document previewer that allows users to look at files in a variety of formats including PowerPoint slides without having to leave the Box app.

When users preview a file, they can also see what apps use Box’s OneCloud system. As a part of today’s announcement, the company said that it added Documents to Go to OneCloud, which will allow users to easily edit Microsoft Office documents stored in Box.

In addition, users who download and log in to Box’s new Android app on a LG G-series device will get 50 GB of free storage for the next year.

Here’s a video that shows how it all works: