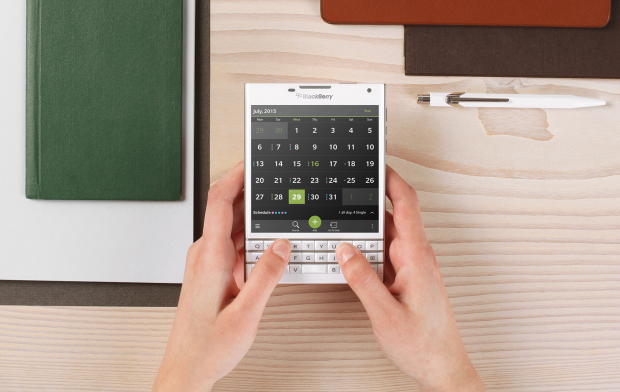 Watching BlackBerry’s share of smartphone subscribers in the U.S. has been like watching a very slowly deflating balloon. It seems like the air may have stopped escaping from the company’s market share, at least for now.

That’s the word from today’s report on U.S. smartphone market share from ComScore, at least. The Canadian company held on to 2.3 percent of the U.S. smartphone market in August, which is the same share it had in May of this year. That’s somewhat comforting for the troubled company, which released its square Passport smartphone last month to reasonably positive reviews. 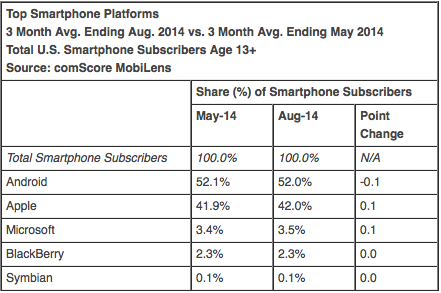 BlackBerry has worked hard to try and pull itself out of the doldrums, and today’s report shows that the company may have a corps of loyal customers that will stick by it even as most of the smartphone-using world heads for the warm embrace of Google or Apple’s platforms.

Other than that, August was basically business as usual in the world of smartphone market share. iOS, Android and Windows Phone were all roughly flat from May until August. As expected, Google and Apple will hold on to their duopoly in the U.S. smartphone market, and it doesn’t look like any other mobile OS is in a position to challenge them. 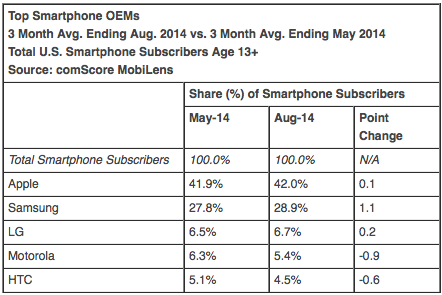 Samsung continued to pick up market share from rival Android OEMs – both HTC and Motorola continued to bleed market share – and cement its position as the leader among companies using Google’s operating system. That’s a positive sign for the company, which announced yesterday that its quarterly earnings won’t meet expectations for the second time in a row this year.

Next month’s report should be a bit more interesting, since it will show how the iPhone 6 launch affected Apple’s position in the market.