Predicting the future has worked out well for Blab.

The Seattle-based social intelligence startup announced today that it has raised $8.8 million of an $11.6 million Series B round that will push total funding past $15 million. The fresh cash comes from China-based Blue Focus Communications Group and Shoreline Venture Management. Operative Capital also participated.

Blab’s predictive algorithm helps brands and agencies figure out what consumers online will be talking about and on what platform, before those conversations even happen. The software allows Blab’s clients to purchase online advertising, push out promotion campaigns, or create contextual content ahead of time before conversations about a certain topic go mainstream.

“We found out how to discover non-obvious conversations that you wouldn’t think about looking for, and then predict into the future how those conversations will increase or decrease,” Blab CEO Randy Browning said. 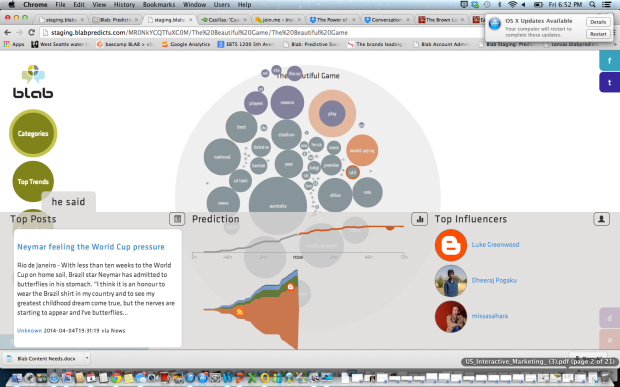 To predict future trending topics, Blab analyzes millions of conversations going on around the web — from news articles to social media chatter — to discover what people are talking about. It then crunches the data and shows users how the volume of a particular topic will change in 30-minute increments over a 72-hour period, and where those conversations will take place.

Browning explained that his company strings together a set of facts “to create a chromosome of a conversation.”

“There is a finite number of conversation patterns that have ever existed in any [format], like video or pictures,” he said. “Our job is to understand each one of those conversations and attribute them to a new conversation that’s coming.”

Browning said that the new round will help grow the current team of 14 employees and also improve the automation features of the company’s product. 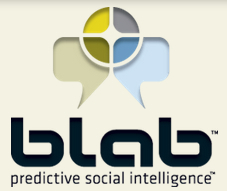 “Right now, it takes an operator to look at a prediction and say, ‘I think I’ll choose this channel over the others because there’s more predicted volume,'” he said. “We want to automate that and in essence create a data management platform where we have automated decisions.”

Browning admitted that he’s somewhat surprised by how quickly Blab has been adopted just two years after launching.

“It feels as if market has been waiting for this,” he noted.

There are a host of similar companies in the social intelligence space, including Seattle startups like Simply Measured, Visible Technologies, and Inside Social. But Browning is quick to note that Blab is not a social media tool.

“There’s a big difference,” he said. “We look at the way people talk as a source of data that we use to improve the effectiveness of buying media or content. Other social tools are Twitter-focused, hashtag-based, or are searching in real-time. That’s not the world we are in.”