Seattle-based game company Big Fish said last year that nearly half of its revenue came from mobile, and now it’s betting some of that cash on its first-ever national TV campaign.

Commercials for game companies are nothing new. We’ve seen the blockbuster console titles, like Call of Duty and Battlefield, compete for massive amounts of airtime. But this one is a different breed: Big Fish is hyping a mobile game — and to females, no less.

The Big Fish commercial leans more toward “Sex in the City” and “Housewives,” than it does a first-person shooter. In the opening scene, four women in cocktail dresses strut into a casino, catching the attention of a man at the bar. They sip martinis and play craps. Unfortunately, reality sets in when a man licking the face of one of the debutantes ends up being a dog sitting next to her on the couch. 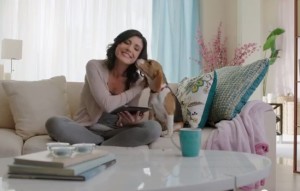 The fantasy (if you can call it one) is over, and she happily returns to playing Big Fish Casino on her iPad.

The company declined to disclose its budget, but described it as “healthy.” In comparison, Zillow disclosed recently that it would spend $65 million on national advertising this year.

If the TV spot sounds like something you’d enjoy, here’s the best 30 seconds on TV you’ve been missing: