Despite iPad sales that were down more than 9 percent year-over-year and below Wall Street’s expectations, Apple has held on as the company with the greatest share of the tablet market during the second quarter of this year, according to a report released today by IDC. 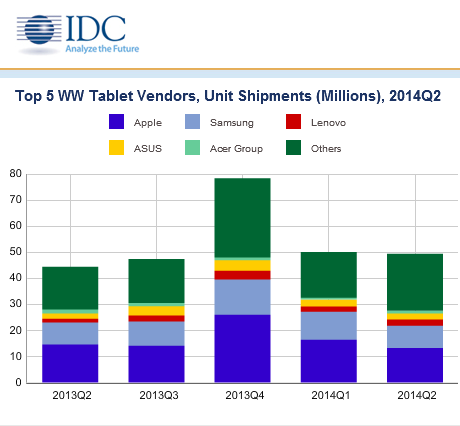 The comparison set up is a bit unfair to Apple, though.

In addition to the competition from other tablets with form factors similar to the iPad, IDC also counted “2-in-1 computers” that can convert from a tablet into a laptop like the Lenovo Yoga. The use of those convertibles is growing, but it’s not clear that people buying them are doing so to replace both a laptop and a tablet, or just a laptop.

Jean Philippe Bouchard, IDC’s Research Director for Tablets, said in a press release that the tablet market is slowing down, but he still sees a bright future for the devices.

“Despite this trend, we believe that stronger commercial demand for tablets in the second half of 2014 will help the market grow and that we will see more enterprise-specific offerings, as illustrated by the Apple and IBM partnership, come to market,” he said.

His optimism mirrors that of Apple CEO Tim Cook, who said on Tuesday that he remains “bullish” about the future of the tablet market.