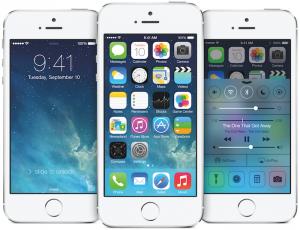 iOS 7.1.1 includes more improvements to the Touch ID fingerprint recognition system in the iPhone 5s, so people who want to unlock their phone with a fingertip can do so more easily. In addition, it includes a fix for a bug that could make keyboards less responsive, as well as a fix for problems experienced by users working with a Bluetooth keyboard and Apple’s VoiceOver screen reading technology. As with all of Apple’s updates, iOS 7.1.1 also includes a handful of security fixes.

The update is incredibly lightweight, clocking in at just over 26 MB for my iPhone 5s and a little over 16 MB for my 4th generation iPad. Users who haven’t yet updated to iOS 7.1, a much larger update that Apple released last month, may find this release to be significantly larger because of the other content included. 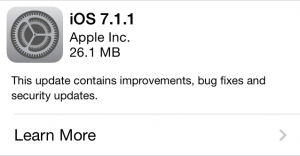 Users can download and install the update for the iPhones, iPads and iPod Touches by opening the Settings app, and then going to General > Software Update. For those who don’t want to update over the air, they can connect their iOS device to their computer, and select “Check for Updates” in iTunes.

As always, there’s a chance that something could go wrong when updating an iOS device, so make sure that it’s backed up before pressing the update button.