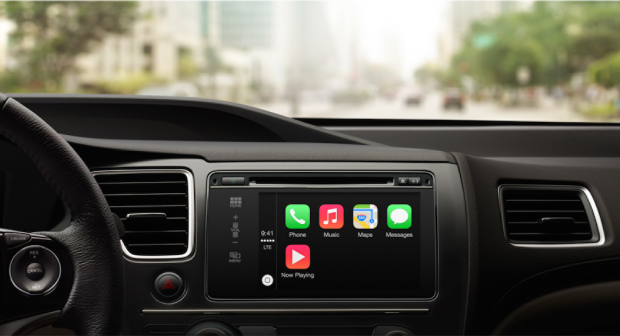 Apple announced today that a number of 2014 model year cars will be launching with CarPlay, a way for users to integrate their iPhones with a new vehicle. The feature gives users access to a number of apps from Apple, including Music, Maps and Podcasts, all tied together with Siri. Users will also get access to certain third-party applications like Spotify and iHeartRadio, though those have to be approved by Apple.

In addition, Siri will be available to handle voice commands, like placing phone calls, transcribing text messages and listening to voicemail, while allowing drivers to keep their eyes on the road ahead.

CarPlay is launching with new vehicles from a number of manufacturers, including Ferrari (which counts Apple Senior Vice President of Internet Software and Services Eddy Cue among its board members), Honda, Mercedes-Benz and Volvo.

Here’s a video from Volvo showing how CarPlay will work in their cars:

Owners of older iPhones might be disappointed, though. CarPlay requires that users connect their iPhone 5, iPhone 5S or iPhone 5C to their car using one of Apple’s next-generation connection cables.

Apple previewed the feature at its Worldwide Developer Conference last June, referring to it as “iOS in the Car.” With more and more cars sporting smartphone integration via Bluetooth, CarPlay gives Apple a foothold in the automotive world. It leverages a key advantage of Apple’s mobile ecosystem: the company only has to worry about ensuring compatibility with a few phones, rather than trying to unify a vast ocean of different phone models, like what Google would have to do with Android.

It’s a move that positions the Cupertino-based company against Microsoft, which has been the provider for the base operating system behind Ford’s Sync technology. However, that relationship is on the rocks. Ford is reportedly reconsidering its use of Microsoft’s Windows Embedded Automotive technology to power Sync going forward, and is also looking to BlackBerry.