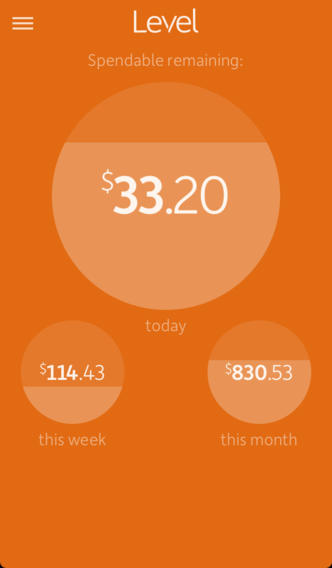 We all have those moments when considering an impulsive purchase. Whether it’s a shiny new copy of the album of the year on vinyl, a really tasty sandwich or a particularly nice handbag that just so happens to go so well with a nice outfit, there’s usually something that’s worth coveting.

But with that comes the eternal question: will it fit in my budget? It can be hard to judge whether a personal budget is capable of handling a particular impulse buy when weighing the decision at the mall or staring at Amazon’s inviting storefront.

That’s where Level comes in. The iPhone and Android app is designed to help make it easier for people to live within their means without having to spend a ton of time categorizing expenses and filtering through complex budgets.

Users tell the app what bills they have to pay in the month, along with how much money they take in. Level then suggests they set a percentage of their monthly income to set aside as savings. Then, they hook up their bank and credit card accounts to Level using an encrypted connection, so the app can grab up-to-date data about their spending.

After that, Level will tell them how much they can spend in a given day, week and month with three simple charts that all occupy the app’s main screen. 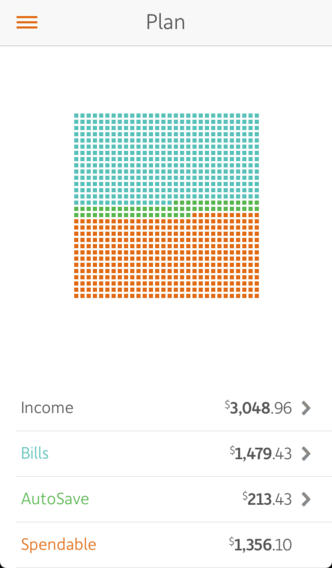 In addition, users can also view a list of all their transactions in a separate tab, and change their spending plan on the fly.

Users can flag transactions they don’t want to count against their monthly total, like a quarterly tax payment or an expense that’s going to be reimbursed, if that’s necessary as well.

Obviously, Level isn’t the be-all and end-all of personal finance applications, but for what it does, it works very well. The app doesn’t care if a user’s trip to IKEA was a household expense or a food expense, like a more traditional budgeting app, so users won’t get detailed data about what areas they’re spending money on within Level.

And that’s okay, because on a day-to-day basis, Level allows people to see a quick-and-dirty heuristic about how much they’re spending, without having to muck around with what category everything falls under. When I’m out and about, I don’t need to know whether I’ve spent $20 on comic books or theatre tickets – I just need to know that I’ve spent it so that I don’t buy a burrito that I can’t afford.

Still, it’s not perfect. Credit card transactions don’t always update instantly, and sometimes are attributed to one day and not another. For making more detailed budgets, or learning more about spending trends, users are better off with another service, like Mint or Personal Capital.

That said, I’ve yet to find an app that’s as good as Level at telling me what my spending patterns look like at a glance when I’m on the go.

Level is available for free on the iOS App Store and Google Play Store.