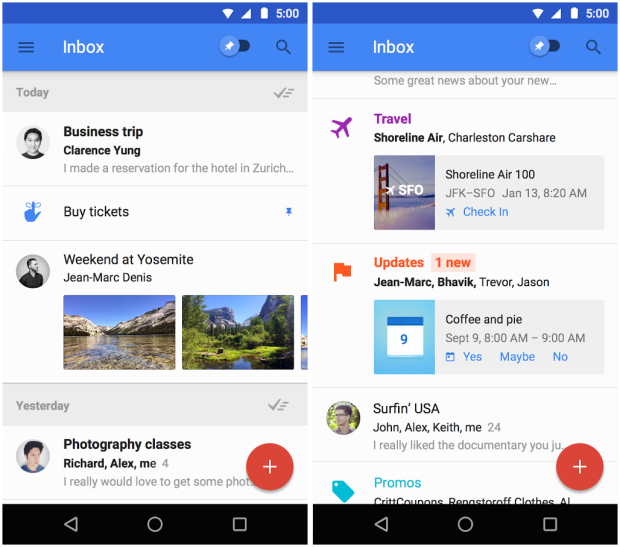 If there’s one great challenge of the digital age, it’s managing email effectively. It’s easy to be inundated by hundreds of messages within the space of a few days, and then get stuck digging through reams of old missives in an attempt to find the one you’re looking for.

There are plenty of existing apps that try to take a different approach to email, but Google decided to take a crack at it with Inbox. The app, which is free for iPhone and Android users, is a new take on the traditional email client formula from the company. It’s not a replacement for the existing Gmail experience, but rather a particular take on what Gmail could be if Google re-invented it today.

Inbox is a very opinionated approach to email: the client treats all of the messages in a user’s inbox as tasks to be completed. When users archive messages, they’re marked as “done.” People can pin important emails to the top of the inbox, and set reminders for what actions they need to take on the message. It’s a model of handling email that’s designed to make people productive, rather than encourage them to leave messages sitting around.

As another part of that strategy, Inbox also lets people snooze messages and reminders that they’re not equipped to deal with at the moment. Can’t tackle an email until Sunday? Snoozing it will keep it from taking up space in your inbox (and space in your brain) until then.

In addition, the app automatically categorizes messages into a handful of folders. People can see receipts – with their amounts – at a glance, and Inbox automatically packs unimportant messages into a “low priority” header that keeps them from cluttering up an inbox. Users can also set up their own filters for particular groups.

Based on my experience, it’s a good way to get more productive with a pile of email. People who have to handle more than 5 messages a day would probably get significant benefit out of using Inbox rather than a traditional interface that pulls everything together into one bucket, regardless of importance. 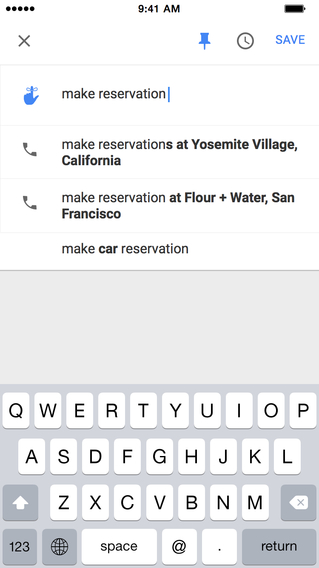 Like a lot of Google’s beta projects, Inbox is only available by invitation, though the company has an open request line and appears to be adding everyone who wants in, so long as they’re willing to be patient. People who already have friends with Inbox have a fast track into the program, since Google is slowly offering up shareable invites to those people who have already gotten in. It’s also only available for Gmail users at the moment, so people who use Google Apps are out of luck.

Inbox’s setup is great for people who are able to fully buy into the ecosystem that Google has created. It’s a solid way to manage your messages, and get more productive with your email. People who don’t want to keep their work and personal emails in the same app will probably really enjoy having a dedicated place to easily tackle problems.

But for people like me who already have a defined email workflow, Inbox’s features can seem like an unnecessary intrusion into an otherwise well-oiled machine. I tie together a small handful of Gmail and Google Apps accounts with assistance from Sanebox and feed all of the resulting messages into Mailbox on my iPhone, iPad and Mac.

If I turn to another client like Mailbox, I lose all the benefits of Inbox’s auto-sorting, and I’m left with a massive pile of emails. While Inbox has a web interface, I’m not a huge fan of it, so the lack of third-party client compatibility is a deal-breaker for me right now.

My other pet peeve with the app has to do with deleting emails. That’s a critical part of my workflow, and Inbox does its damnedest to hide the delete button behind a drop-down menu. Compare that to Mailbox, which lets me delete an email with just a swipe. I don’t need to save all of the messages that I get — I’m not going back to look for that Uniqlo promotion two weeks from now — so I aggressively delete things to make things easier to sort through. Inbox, as its built right now, stands in my way.

Overall, people who want to get a better handle on their email (especially those who haven’t really tried before) will be well-served by Inbox. I’m already set in my ways, but many people wil get a lot of help from Inbox’s setup. Personally, I’ll wait until after it’s open to Google Apps users to see if I can make it work for my whole workflow. Until then, it’s back to my old ways.

To request an Inbox invite, send an email to inbox@google.com. The Inbox mobile app is available for iPhone and Android.