At its fifth annual Demo Day this afternoon, the Techstars Seattle startup accelerator announced that Andy Sack will step down from his post as Managing Director and will be replaced by Founder’s Co-op General Partner Chris DeVore.

Holding back tears and recounting his own entrepreneurial journey, Sack thanked the community for being able to serve them in role as director of Techstars.

“It truly has been my honor,” he said. “So, thank you for allowing me to love you all.”

With tears swelling, he lated added that it can be tough for entrepreneurs to make their way to first base, which is part of what Techstars is about.

“If you don’t cry during your entrepreneurial journey, you are not working hard enough,” he said.

He received a standing ovation from the crowd.

Sack brought Techstars to Seattle in 2009 and has helped more than 50 startups graduate from the three-month program in the last five years, including companies like Bizible, Glider, and Shippable. 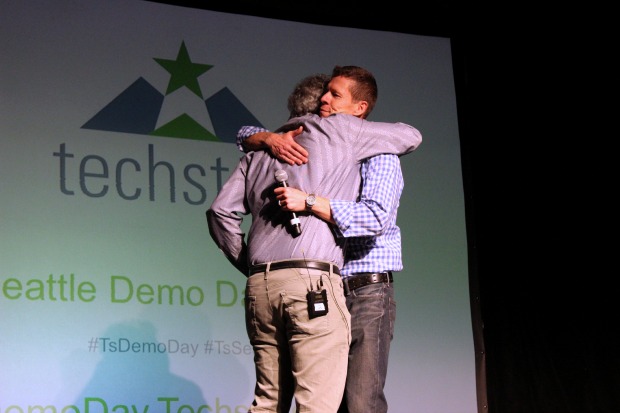 “I set out on a 5-year mission to improve the Seattle startup ecosystem,” Sack said in an interview with GeekWire. “I feel like I’ve done that. It’s time for me to move on.”

Sack said that Devore was the “obvious person for me to hand the mantle to,” as the pair have worked together for more than a decade and are partners at Founder’s Co-op, a Seattle-based seed-stage investment fund that the veteran entrepreneurs helped start six years ago.

“For me, taking on the leadership role at Techstars Seattle is a natural extension of the mission Andy and I have pursued since we started Founders’ Co-op back in 2008, which is to make the Pacific Northwest one of the world’s best places to be an entrepreneur,” Devore said.

Sack, who successfully battled cancer and said health issues had nothing to do with his decision to step down, noted that he’ll continue advising a variety of startups and “help Seattle’s entrepreneurs remain strong.” He called his time with Techstars “nothing short of amazing.”

“We have some amazing companies that have gone through the program and I suspect going forward Techstars Seattle will be the dominant accelerator in the Pacific Northwest,” Sack said.

GeekWire is here at Demo Day watching pitches from the newest Techstars Seattle class, and we’ll be posting a recap soon.