Will Amazon’s new campus in Seattle’s downtown make it a less secretive company?

Probably not, but the company’s architect, Scott Wyatt, the chairman of NBBJ, painted a picture of Amazon’s new urban headquarters today of an open concept that will help employees be more productive and innovative, and ultimately, more part of the community.

Wyatt appeared today at the Quartz conference in Seattle, where the discussion was focused on accommodating the next billion users, devices — and in this case — employees.

“We could have built a suburban campus,” Bezos said. “I think it would have been the wrong decision.” His reasons for that included wanting to employ people who appreciate “the energy and dynamism of an urban environment.”

Wyatt echoed those comments today, citing Amazon and other big tech clients, including Samsung, as examples. Samsung is currently building a U.S. headquarters that will mimic an urban-style headquarters, albeit in the the suburbs of Silicon Valley.

As part of the conversation, Wyatt discussed his company’s goals of creating work spaces that are efficient, collaborative and productive. Specifically, as they applied to Amazon, he said it was important for the offices to be in downtown Seattle.

“Cities are incredibly important — half of us are living in cities, and in two decades it will be 70 percent,” he said. “Cities are also very efficient for idea production and productivity, and tech clients are realizing that efficiency of cities is important to them.” 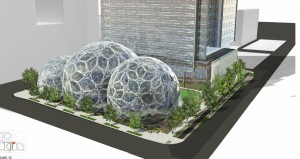 With an illustration of the biodomes, or spheres, that Amazon plans to build in downtown Seattle, Wyatt described a scenario that would not seem possible for Amazon, a company that characterizes itself as quiet (or by anyone else’s definition, secretive).

But, he said security devices have changed, making it possible for the first floor of all three of Amazon’s towers, the spheres and the company’s dog park, to be open to the public.

“Security doesn’t happen until second floor,” he said. “The employees will be part of the city. They will not just see their coworkers and be inspired by that, but they’ll also see people from other companies.” 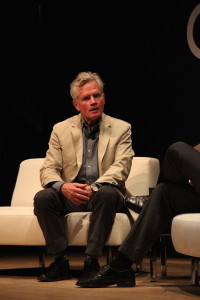 He said in the past, a company’s dream was to build a campus in a forest or a field — an easy way to describe the the massive complexes owned by Google, Microsoft and Facebook. It was a “lovely image of a lovely building,” he said, “but it’s isolating.”

Seeing more employees and making eye contact are two key ways to increase collaboration and coming up with new ideas. For instance, in Samsung’s U.S. headquarters, one proposed design created an atrium, so employees could see each other on the same floor and a floor below. Interactions were tracked by calories burned number of eye contacts made in a day.

Other things that are currently broken in traditional buildings, he argued, are meeting spaces. The key is to offer a variety of room types, he said. Some are designed for standing up, and others for privacy (acoustically or visually). Some rooms may even be outside. In fact, the greatest applause of the day’s conference came, perhaps, after he said this: “There’s no effective place to meet than to walk around the block.”

As Bezos admitted, an urban campus is more expensive, but clearly Wyatt believed it was a worthy expense.

“At a very high level we are in furious competition for the best employees,” he said. If he can come up with a design that makes employees feel efficient, collaborative and appreciated, then it’s all worth it. Without those things, Wyatt said, “We will fail.”