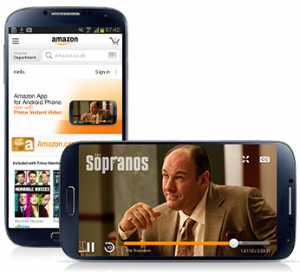 The new Prime Instant Video player app will allow users to watch videos on their Android phones from Amazon’s full catalog, including a selection of shows produced for HBO like “The Wire” and “The Sopranos.” It’s available through the Amazon Mobile for Android app. Amazon is clearly hoping that selection will draw people to try out its AppStore alongside the Google Play Store, which comes pre-installed on most devices running stock Android.

That’s important for Amazon, since its mobile devices won’t get access to Google’s marketplace. The Mountain View-based tech titan keeps its Android apps, including the Play Store, reserved for companies that release phones that run a mostly-stock version of Google’s operating system. Because Amazon doesn’t do that, it needs to provide its own store, and runs the risk that developers won’t release their apps to run on it.

In order to attract developers, Amazon needs to show that it has a critical mass of users to buy apps on the AppStore, and this move could help provide additional customers. Drawing people to the AppStore could also improve future adoption of Amazon hardware: people who have already downloaded their apps from the AppStore will have an easier time transitioning to a Fire phone.

The announcement comes after the Seattle-based company dropped the price of its new Fire smartphone to 99 cents, following a lackluster launch earlier this year.

People interested in downloading the app can find out more here.