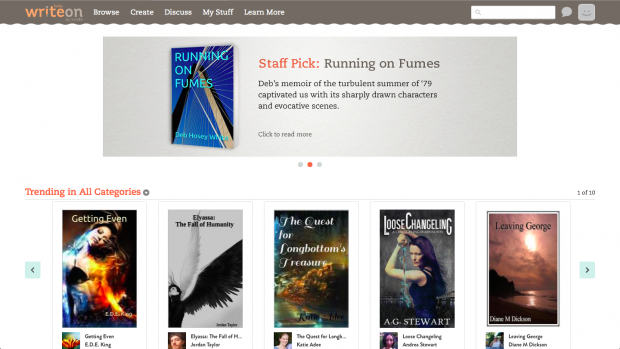 People who are looking for feedback on their latest writing project now have a way to turn to the wisdom of the crowds. Amazon today announced WriteOn by Kindle, a new collaborative writing platform for authors, in a post on its Amazon Breakthrough Novel Award forums.

It’s a tool that’s designed to allow writers to work on their next big project, and share what they’ve done with a community of other creative people to get feedback on their product. Users can post their work, comment on what other people are doing, and connect with a community of other authors using the service’s built-in forums. WriteOn is still in beta, and Amazon said that it’s “a little experimental, a little seat-of-our-pants, and hopefully a pretty sweet time for all involved.”

WriteOn has the potential to benefit both authors who self-publish on the Kindle, and Amazon. Getting someone to edit a self-published work can be an expensive process, and Amazon’s new service gives authors a chance to get a response from their peers before moving towards publication.

It’s not a great environment for sharing a story someone wants to keep under wraps – any segments shared are public to the whole WriteOn community – but it seems like a good environment for people who want feedback.

This isn’t anything new in the literary or technical spaces. Groups of writers often come together to share their work and get feedback, whether in the context of a formally defined workshop or in terms of a loose group of friends. Services like Wattpad offer writers the ability to share their work with a community online as well. But what sets WriteOn apart is its connection to Amazon, which controls a major part of the e-book market and also has its own publishing arm.

Amazon’s timing seems hardly coincidental. November is National Novel Writing Month (NaNoWriMo to its devotees), which involves writers creating a 50,000 word first draft in the month of November. After that, people who are happy with their novels may go on to refine them and move towards getting them published. Sharing some of that product with the community at WriteOn seems like a natural fit both during and after NaNoWriMo.

People interested in trying WriteOn out can go to writeon.amazon.com and enter the code X9RJTE9H