Amazon’s first TV commercial for its new Fire Phone debuted today. You can watch the 30-second spot here, or at the bottom of this post. 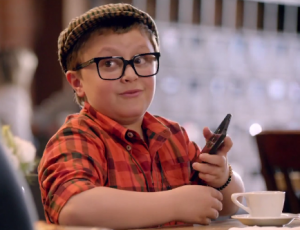 To begin the commercial, the kids tell each other what they have on their phone. The boy has Twitter, Minecraft, and Hunger Games; the girl has Pinterest, Skyfall, and apparently reads Sheryl Sandberg’s popular book, Lean In.

The kids then tell a woman, who is presumably one of their mothers, how they can access “tons of cool stuff for no extra charge” thanks to Prime.

“I’ve been on this earth nine years, and I’ve never seen anything like it,” the boy says.

Amazon’s ad strategy with this commercial is a little different than when Amazon Fire TV spokesperson Gary Busey talked to inanimate objects for 15 straight minutes. But it’s clear that the company is highlighting the Prime membership benefits — access to movies, music, Kindle books, and two-day delivery — to potential smartphone buyers.

The Fire Phone debuts July 25. Read our initial review here, and watch the ad below: