(Video above is from our news partner, KING5)

Coming all the way from Osaka, Japan, the world’s biggest tunnel boring machine arrived on the Seattle waterfront this afternoon. The $80 million machine came in 41 pieces and will be assembled in the pit where Bertha will begin digging the new two-mile Highway 99 tunnel underneath Seattle along the city’s waterfront.

The West Seattle Herald has some nice pictures from Bertha’s arrival today.

Sounds like she’s liking Seattle so far, especially the fact that no rain has fallen today.

Nice place you've got here. I was expecting rain.

And apparently she was pretty hungry after that long trip.

It's been a long trip. I'm starving. I don't suppose those barges to the south of me could spare any dirt. You know, just a little snack.

At 57.5 feet in diameter and more than 300 feet long, Bertha is named after former Seattle Mayor Bertha Knight Landes, the first female mayor of a major U.S. city. She’ll be put together by this summer, and that’s when Bertha will begin digging from SoDo to South Lake Union. A four-lane underground tunnel is scheduled to open by 2016, when the current viaduct will be demolished.

WSDOT put together a neat viewing guide for those who want to watch Bertha in action. 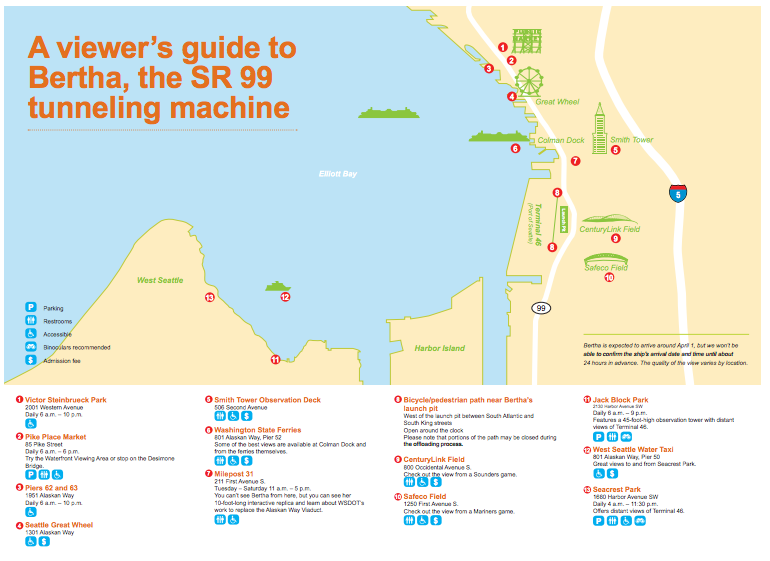 And here’s a good video showing how Bertha works: