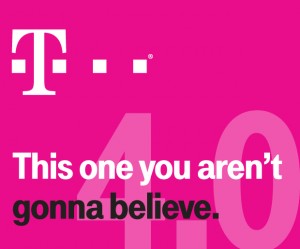 According to an invitation sent to journalists today, T-Mobile will be hosting a media event at the Consumer Electronics Show on Jan. 8 to give an overview of the next changes it’ll be making as a part of its “Uncarrier 4.0” moves.

While the company is keeping its actual plans close to its vest, the invitation says “This one you aren’t gonna believe.” If the rumor mill is to be believed, it’s possible the company may be looking to help users switch by paying their contracts’ early termination fees.

TmoNews is reporting that it received an unverified anonymous tip which said that T-Mobile is working on a program called “Houdini,” which would allow users switching from another network to get reimbursed for the cost of jumping ship from one of the company’s competitors.

The news comes as rumors have begun to swirl about companies interested in acquiring the carrier, including Sprint, which purchased Clearwire earlier this year, and Dish Network.

What do you think the next “Uncarrier” move is going to be? Is it plausible for T-Mobile to try and help potential switchers get out of their existing contracts? Let us know in the comments.