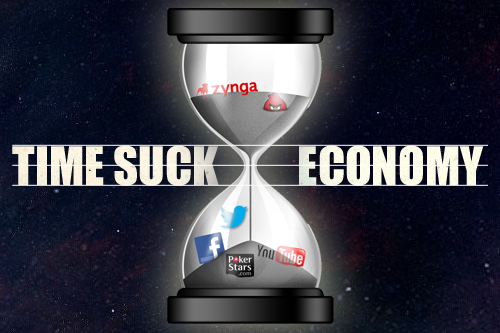 Time is our most precious asset. Yet, we’re wasting far too much of it.

It’s called the time suck economy. And it’s available on a smartphone near you.

It’s a waste of time. And it is sickening. My big problem with the time suck economy is that it rewards individuals and companies for building apps that provide very little utility.

Seth Godin says that entertainment is different than utility, noting that “media doesn’t just change what we focus on, it changes the culture it is part of.”

As I see it, there’s too much focus on entertainment these days, and not enough on utility.

I, for one, only use apps on my phone which solve specific needs. For example, finding a nearby restaurant; directions to a meeting; or electronic tickets to a concert. Aside from Twitter and Facebook, I don’t really entertain myself on my phone.

While there have certainly been interesting people and information I’ve come across via Twitter and Facebook — the efficiencies of those platforms are far from optimal.

By my count, about half of the time I spend on Facebook and Twitter is wasted. I’ll be the first to admit that I need to spend less time on the sites (and I have been recently). Facebook is going to come under some intense competitive pressure over the next couple years (See Why the downfall of Facebook is more possible than you think)

My takeaway is this. Don’t add fuel to the time suck economy.

Of course, you can spend your time working on whatever project you wish, but I’d urge you not to fall into that trap. After all, why make it easier for people to accomplish less in life?

I’m not naive. I realize the only real way to change the time suck economy is by decreasing the demand-side of the equation — a difficult proposition since it involves changing the mindset of millions. As it stands today, the demand for time-wasting crap is there, so someone will fill it.

What would happen if we all used our powers to truly help others lead better lives by enabling them to make BETTER, not worse, use of their time?

“If you’re not making someone else’s life better, you’re wasting your time.”