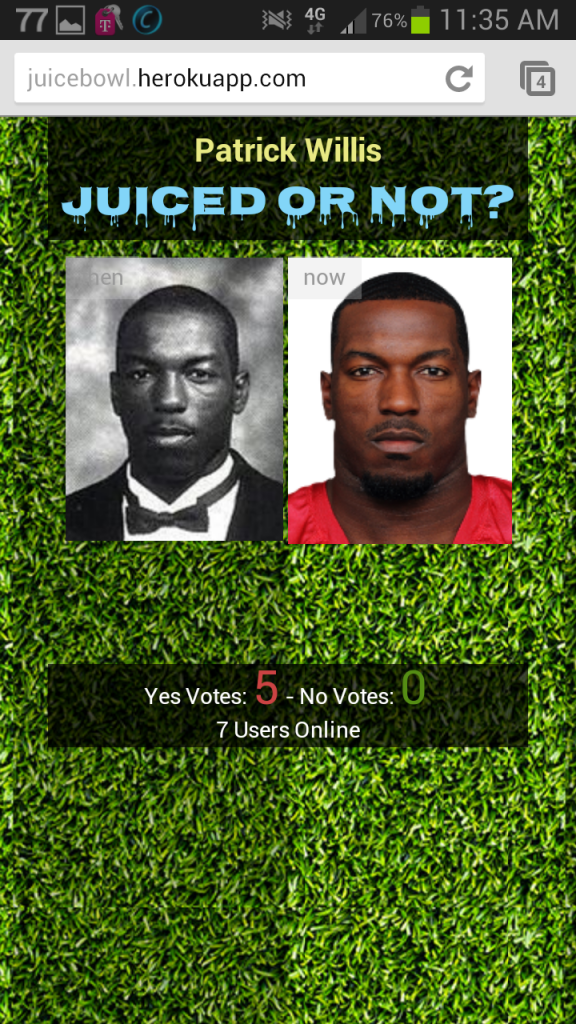 The demos concluded, judges had left and computers were tucked away. Yet an hour after Sports Hack Day wrapped up Sunday afternoon, there was one team still going at it.

As the Super Bowl streamed in front of us, my comrades noticed a problem. Our project “Juiced or Not,” an app that shows then-and-now comparisons of NFL players during live games and allows users to vote on if they think a player has used performance-enhancing drugs, was running into problems during the big game.

“Should we edit the back-end to include defensive players, too?” asked Dan Arrington.

The hackathon was over. The cool prizes were in the hands of other hackers who impressed the judges more. Beer was being poured and pizza was arriving soon — we didn’t need to work anymore.

None of that mattered.

Even after working nearly 24 total hours in two days, my guys still wanted to keep going. They whipped open their laptops, messed around with the code, and 10 minutes later our app was cycling through both offensive and defensive players after every Super Bowl play.

As the Ravens and 49ers duked it out in front of us, we sat there smiling with our phones in hand. We had figured out a way to connect a running stream of the game to the app so that a player involved in a given play — whether he was passing, running, tackling or kicking — would show up in our app.

As the thumbnail photos updated just seconds after each play and we had fellow hackers peering over our shoulders wanting to know what was going on, there was this sense of accomplishment. The kind when you sit back and marvel at something successful you’ve built, be it a car, house, article or computer program.

I didn’t expect this feeling when I embarked on my first-ever hackathon experience Friday afternoon. I walked into the HUB Seattle way out of my comfort zone, surrounded by expert computer programmers and designers I had never met nor worked with before.

And while I didn’t leave Sports Hack Day wanting to apply for computer programming jobs — don’t worry John and Todd, I love GeekWire too much — I certainly found new perspectives.

As I detailed in an earlier diary post, my team clicked instantly.

“It’s pretty crazy that 48 hours ago, none of us knew each other and we came together to build this awesome thing,” Arrington told me.

We were all open to teaching each other and talking through problems. The squad never seemed to argue, and in fact, that may have hurt us in the end. Maybe more disagreement or discussion would have eventually led us to a stronger, more impressive creation and presentation of our project when it was all said and done.

“A product is as much the image people have of it as the actual working thing,” team member Nico Flacco — no relation to Joe — said.

Even though we didn’t necessarily win anything, I feel fortunate to have experienced a programming project like this from start to finish. Five guys met up on Friday with absolutely nothing —  by the time we left on Sunday, our working app was featured on local TV station KING5 and Hacker News.

It’s really an amazing thing when people come together to build something awesome without any monetary or work-related goal at the end of the tunnel. We weren’t getting paid, there were no bosses over our heads and we did not have a customer base that absolutely needed “Juiced or Not” to be done.

But yet we still sacrificed those valuable weekend sleeping hours to do this thing. Why? Who knows if there is one actual reason. It could be as simple as getting people together who share a common passion and care about the end goal.

I learned a lot. Even though my teammates talked in a foreign computing language most of the time, I learned about programs like Mongo, GitHub, JSON, Node and Heroku.

I learned how much behind-the-scenes work it takes to build a working and aesthetically-pleasing application. I also learned how to put on a great event — major props to Carter Rabasa, Jon Rooney and the rest of the organizers. Everything from the food (Panera, Chipotle, Greek, Pagliacci, Pot Belly, Greek … I am salivating now just thinking about this) to the Wi-Fi to the event itself went super smoothly.

And even though we didn’t come away with Xbox 360 games or Google Nexus tablets, Nico put it best.

“Despite not winning,” he said, “I thought we built something kick-ass.”

Can’t ask for much more than that.

Diary Post 1: Join me this weekend for my first-ever hackathon experience

Diary Post 2: ‘Sports Hack Day’ Diary: Pitching ideas, picking teams and getting started on a football ‘PED or Not’ app