Social commerce is about ease. And what’s easier than using a hashtag to make a purchase? Today American Express, in conjunction with Twitter, is launching a program built on that premise.

The idea is simple. American Express partners with a retailer and assigns a hashtag to a physical product.

Cardholders who have opted-in and synced their Amex card to their Twitter account can then buy an item simply by tweeting its designated hashtag. The user then gets an automated response to their Twitter account with a confirmation code. Users have 15 minutes to tweet the confirmation hashtag and confirm their purchase. Amex then, taking a page from Amazon’s playbook, provides free two-day shipping. It’s an easy way to get consumers to spend more. And they surely will.

The concept is similar to a service being offered via Portland’s Chirpify — in the news earlier this month for helping rocker Keith Richards’ sell a $30 T-shirt via Twitter.

To start Amex is launching the program today with several products that will be available until March 3, including: a $149 Amazon Kindle Fire HD, a $179 Sony Action Cam and waterproof headband mount, an $80 Urban Zen bracelet designed by Donna Karan, and a $179 Microsoft Xbox 360.

Last March, American Express began the process of grooming their users into becoming comfortable with the concept by encouraging them to connect their accounts and tweet hashtags to receive special merchant offers. Today’s move is just the natural progression of that initiative.

“We’ve been doing a lot in the area of social commerce over the past two years. Twitter Offers launched last year, and the response has been pretty fantastic. We want to bring in the new technology that we have to life in a most dramatic way, which we think Twitter is ripe for.”

Of course with any such system security has to be a concern. Bradley Minor, Vice President PR & Social Media Communications at American Express told ABC News how Amex would try to handle it: 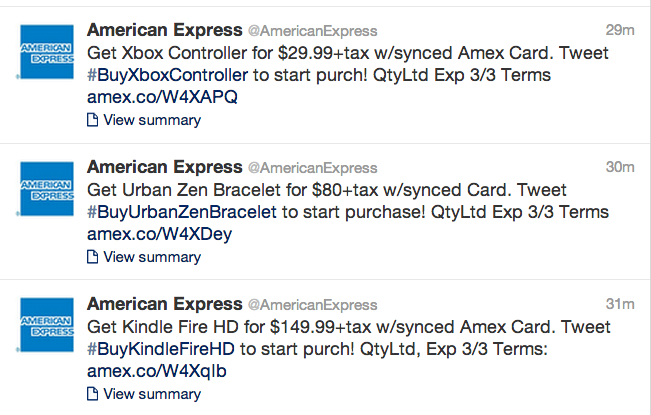 “Safety and security is core to our brand and to our new social commerce initiatives,” Minor answered. “No Cardmember account information is shared with Twitter. The process of syncing a Card is conducted on secure American Express servers.”

Which is all fine and dandy, except for the fact security has never been Twitter’s strong point. The platform is rife with phishing.

On a daily basis I get DMs from people whose accounts have been hacked, asking me if I had seen a funny picture of myself and inviting me to click on a link that would in turn compromise my account. Constant phishing scams aside, Twitter had a security breach earlier this month that compromised 250,000 accounts.  Hardly reassuring.

While theft of goods is a possibility, especially if virtual goods are ever placed by Amex in the program, people bent on just causing mischief could simply place false orders potentially ruining other’s credit. And it’s not simply the matter of hacking accounts through tried and true methods. A lost or stolen smartphone with a Twitter app enabled could just as easily do the trick.

That sort of inherent weakness to Twitter’s system, makes it a poor partner for a company like American Express who is so focused on security.

Here’s a closer look at how the new service works: