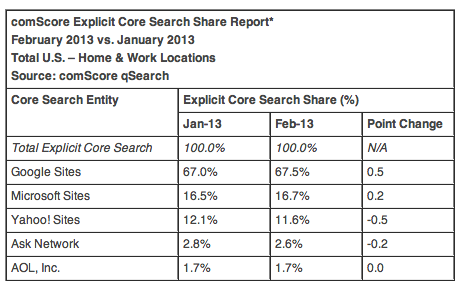 Google continued to climb up the U.S. search market in February, inching farther ahead of Microsoft Bing and Yahoo.

Microsoft’s search partner, Yahoo, fell by 0.5 percent to 11.6 percent of the market.

Microsoft has seen Bing’s market share climb significantly in recent years. Microsoft provides the underlying technology for Yahoo’s search engine and search ads, but the partnership between the companies hasn’t paid off like the companies had hoped.

“One of the points of the alliance is that we collectively want to grow share rather than just trading share with each other,” Mayer said. She added: “We need to see monetization working better because we know that it can and we’ve seen other competitors in the space illustrate how well it can work.”

Also earlier last month, Yahoo and Google announced an agreement to put ads from Google’s AdSense and AdMob systems on Yahoo sites, a clear sign that Mayer is willing and able to do business with her former colleagues at Google.

Microsoft, meanwhile, announced that it will continue to bashing Google with its “Scroogled” campaign, which highlights the fact that the search giant uses the contents of Gmail messages to deliver ads.