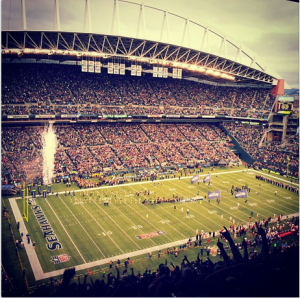 Give us that record back, damn it.

During the second quarter of the Monday Night Football game against New Orleans, thousands of rabid Seahawks fans at CenturyLink Field just set a world record for crowd noise for the second time in three months.

Below is verification from the team’s Twitter account, showing a decibel reading of 137.6. It narrowly beats Kansas City’s record 137.5 decibles set in October.

Looks like the record was broken after Seahawks wide receiver Doug Baldwin pulled in a 52-yard catch midway through the second quarter.

The Seahawks ended up crushing the Saints, 34-7. Meanwhile, fans were so loud Monday night that they registered seismic activity.