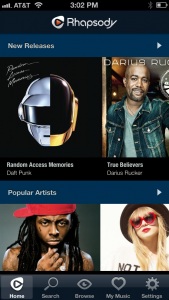 There are several differences from the old look, including a new visual homepage, updated artist and album pages, personalized organization and a new full screen player.

Earlier this month, Rhapsody became the first music service to offer liner notes within their platform in support of The Academy’s “Give Fans The Credit” initiative.

The company has been in the streaming music space since 2001 and saw its revenue rise nearly 13 percent in 2012, to $143.7 million, while Rhapsody reduced its annual loss to $12.3 million, an improvement over its $13.6 million loss the previous year.

The larger revenue comes despite tough competition from rivals like Spotify, Pandora and Rdio. It follows deals including Rhapsody’s MetroPCS partnership and its acquisition of the Napster music service from Best Buy in late 2011.

Google just unveiled its new online music service and Apple has been rumored to be building its own streaming music services as well. It makes sense, as global music sales rose 0.3 percent last year to $16.5 billion for the first time since 1999, largely due to the subscription-based services.