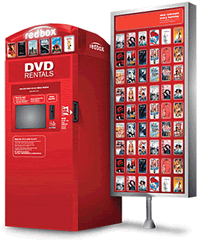 Outerwall also posted its second quarter earnings today, which showed an increase in net income of 4.1 percent to $554.2 million from the second quarter of 2012. That growth was driven by the Redbox business, which brought in $478.5 million, an increase of 4.5 percent from last year.

Net income for Outerwall was up to $46.9 million, up 27 percent from this time last year. That’s an improvement from last quarter, when profits fell to $22.6 million.

Earlier this month, Outerwall gobbled up ecoATM, a San Diego company that makes automated kiosks for buying used phones and other electronics, for $350 million in cash.

Redbox has more than 36,000 kiosks nationwide.