When people signed up to attend Wednesday’s Ping-Pong Anniversary Bash, they were expecting a few things: fun games, tasty food and good company.

What they likely didn’t plan on was witnessing the most intense, competitive and flat-out freakin’ awesome ping-pong match many of us have ever seen.

With a buzzing crowd surrounding the final table inside Seattle’s Showbox Sodo, Qhode’s Avi Cavale and Flowroute’s Tetsuo Kasahara put on a show in the championship match of the expert ping-pong bracket. 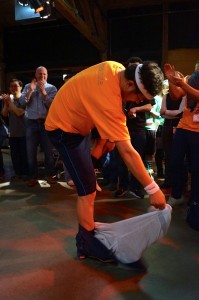 Kasahara, a former Japanese national champion who flew across the Pacific just to compete in the Bash, won the first set in impressive comeback fashion. The man from Japan took a big lead in the second set and it nearly looked over, but that’s when Cavale mounted his victory run.

“At that point I had nothing to lose,” Cavale said afterward. “I just went for it and a couple shots went through. It got close and it got tense.”

As the tension rose, so did the quality of play. Several rallies drew oohs and aahs from the crowd, and when Kasahara stripped off his breakaway sweatpants and went into shorts mode after losing the second set, things got real.

The two went back-and-forth in the final set with the championship on the line before Cavale squeezed by with a 11-9 third set victory, taking home his first ever GeekWire Ping-Pong trophy.

“I haven’t played for 14 years. This was my comeback,” Cavale said. “I feel really good about it. It’s a great place to win, all these people yelling for me. It was fantastic.”

Kasahara said he hadn’t picked up a paddle in five years. But he sure looked like a pro out there Wednesday night.

“I have not been playing table tennis for a long time, but I thought I could win today,” he said. “[Cavale] is a nice player. I respect him.”

And that’s not the only trophy we handed out Wednesday night. Taking home the intermediate ping-pong trophy was 9Mile’s Sanjay Puri, who ousted Penny Arcade’s Levin Sadsad in the final.

Over on the foosball table, Preston Holland and Keegan Runnals of BrandVerity beat out Justin Elsberry and Aaron Regan of 47Degrees to bring home the championship trophy. You can check out the full results with our brackets below.

Click this link or the thumbnail below for a PDF of the expert ping-pong results. 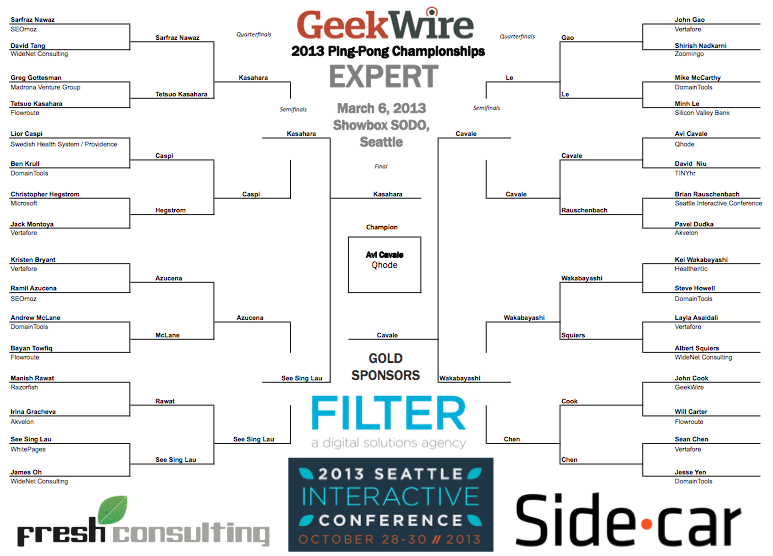 Click this link or the thumbnail below for a PDF of the intermediate ping-pong results. 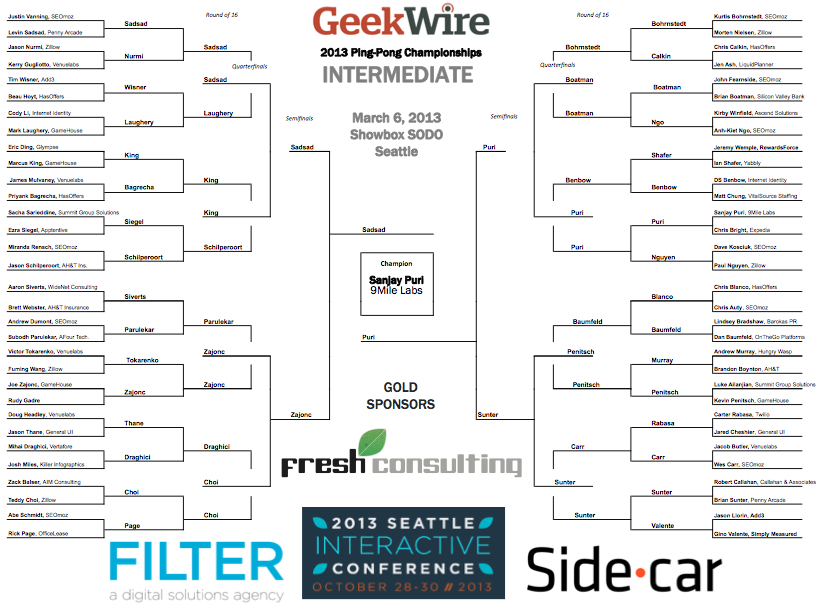 Click this link or the thumbnail below for a PDF of the foosball results.