We’ve seen brick-and-mortar booksellers close down all over the country due to online retailers like Amazon. Will public libraries follow suit and vanish from the earth?

It doesn’t seem like it, at least not according to an extensive Pew Internet report just released that shows how people feel about reinventing libraries. Pew asked 2,252 Americans ages 16 and above about how they use libraries and what they want to see changed.

There has certainly been a push to incorporate more technology in libraries, whether it’s in the form of computers, e-books or online databases. But the study shows a certain element of the physical library that is still important for people, especially those who lack experience with new technology or don’t own the latest gadgets.

Regardless, there is certainly a demand for more e-book selections. 58 percent of people surveyed would be likely to checkout e-readers already loaded with books and 51 percent would take classes on how to use devices like the Kindle. Pew says this is a “significant growth” from last year.

But that doesn’t mean people want to see libraries replace all physical books with a digital ones. Some 36 percent said libraries should “definitely not” change by moving books out of public spaces, while only 20 percent said that they “definitely” should.

Librarians also noted lack of funds and restrictions from publishers as keeping them from providing more e-books.

“As a public library in a poverty stricken rural community we provide the only link to the outside world through our computers,” she said. “Our citizens do not have internet service or computers at home. Many do not have transportation and there is no public transportation which leaves many adults and children isolated. We, at the library, are working to develop a way to provide internet access and computers to everyone in our county.”

An overwhelming 91% said public libraries are important to their communities. Many librarians said they see the library, now more than ever, as a place to enable access to information like job applications, regardless of the format.

“I believe public libraries should move away from being ‘houses of knowledge’ and move more towards being ‘houses of access,’” one wrote. “This is what the public is asking for and we are here to serve them.”

There are, however, some technologies that people definitely want in libraries. 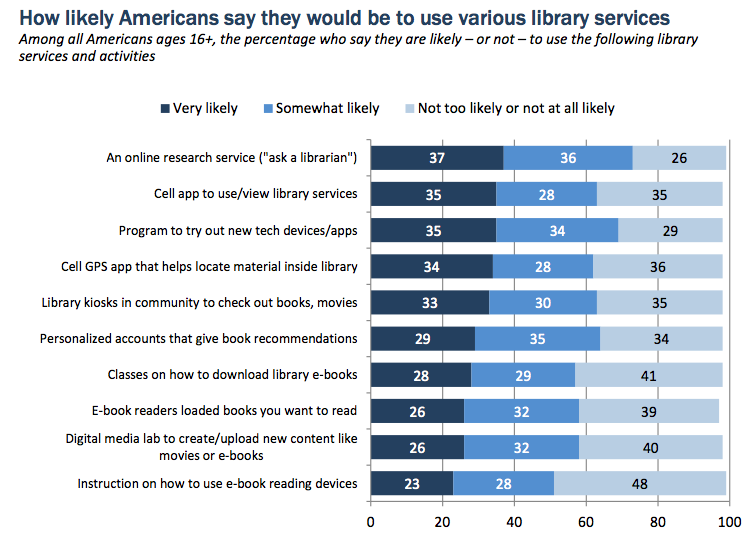 Overall, 69% said they would be interested in a “technology petting zoo,” which is essentially a demo station that allows people to test out the newest tech devices or applications. But with how quickly gadgets improve these days, it’s tough to keep the stations updated.

“It’s expensive to stay up with all of the new gadgets, so I see us transitioning this program—perhaps to more of a crowdsourced technology petting zoo where community members are invited to bring in their devices and share with each other,” one librarian said.

Then there’s the “Amazon recommendations” element. Similar to how Amazon offers items that you might like based on your personal profile, 64% of those surveyed said they would be interested in personalized online accounts that provide customized recommendations for books and services based on their past library activity.

“Personalized accounts sound great but the idea of tracking patrons use and having that data on file seems like an invasion of privacy in many ways,” one library staff member said.

It’s not easy catering to everyone’s needs and adding new technology at a community place like a library. Tech-savvy people with the funds to own the latest devices seem to prefer a tech-focused library, while others who either do not own new technology or do not use it need a place  to help them gain access to the digital world.

“These findings paint a picture of a public that wants its libraries to be all things to all patrons,”  said Lee Rainie, Director at the Pew Internet Project and co-author of the report on these findings. “There is no clear roadmap of public priorities for libraries, so different communities will likely come up with different mixes of services as they move into the future.”

These are all topics that will be debated and discussed at next week’s American Library Association conference in downtown Seattle.