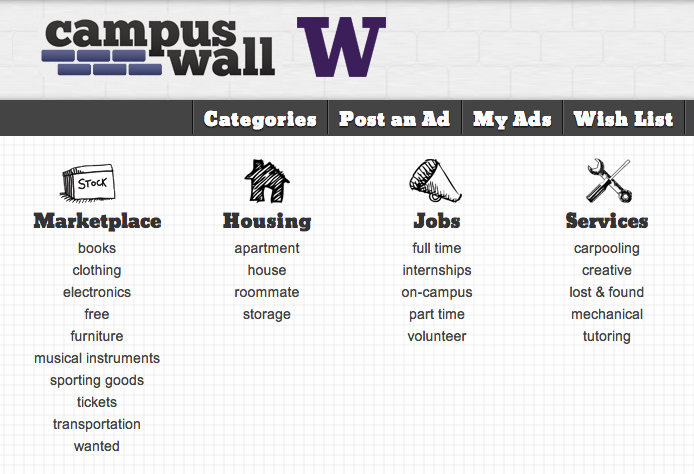 We’ve all encountered those questionable Craigslist ads: one person looking for an “R. Kelly Impersonator,” another selling a portable stripper pole — the list goes on.

Personally, when I see an ad posted by a man who is “Unemployed. Short and bald. Chubby and pale with small features.(hands feet ears) Dominating, picky and judgemental. Sometimes a little awkward around women,” a red flag goes up, and probably for good reason (see similar postings here).

This is why I was pleased to hear about CampusWall, a website that essentially provides the same service as Craigslist, but exclusively for college students and employees and in a much safer way.

Rather than those “meet me in the back alley to retrieve the couch” email exchanges, CampusWall enables students to safely “buy, sell, swap, and share goods and services” within a community of their peers.

CampusWall made its way into the online marketplace world last April, when Seattle mom Tina Snyder became concerned for her daughter’s safety.

Snyder didn’t like the idea of her child meeting a stranger downtown to pick up a bike that had been advertised on Craigslist. She was worried her daughter could be in danger, but also frustrated by the amount of furniture college students abandon on move-out day.

Inspired, Snyder didn’t waste any time. She hired a design team, and got the ball rolling with an operation that now partners with other well known, college-oriented companies like Chegg, Student Discover Card, MiiR and Prep Sportswear. The site was also selected as TiE Seattle’s startup of the month in December.

UW-Green Bay was CampusWall’s first big launch location. The school’s dean of admissions partnered with the company to conduct a successful roll-out launch at the beginning of the fall term.

The company currently works with 160 schools — spanning 136 cities in 39 states — and is growing. In order to sign up, you must have a .edu email address from one of the listed schools.

Once you’re into the site, you have four categories to choose from: marketplace, housing, jobs, and services.

The site’s user interface design is hip and pretty intuitive, but unfortunately there have been no ads posted by University of Washington students yet. No beer-stained couches for me, I guess.

The site did send GeekWire some examples of what a typical posting looks like, though. The photo below shows textbook ads posted by students on the University of Wisconsin-Green Bay CampusWall page. 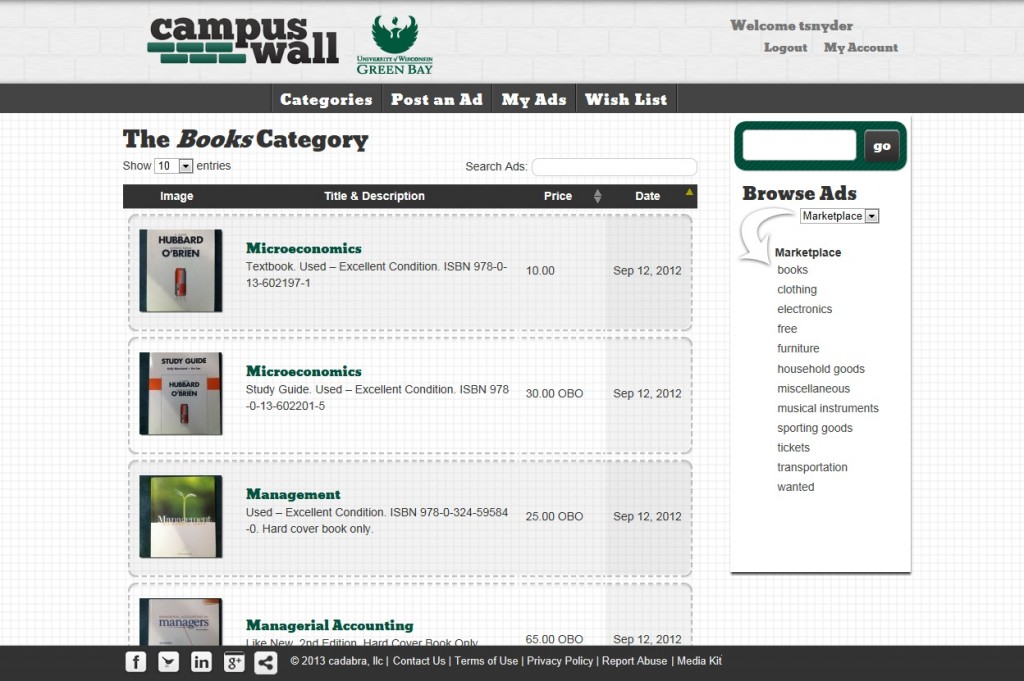 CampusWall is a free service to higher education institutions and works with MBA programs to develop models that allow student teams to earn school credit by launching and running the site on their campuses.

At many universities, the site integrates with a school portal system using a single sign-on.

CampusWall is currently self-funded and has about 12 employees, including web and mobile developers, marketing personnel, and a team of student advisors and interns.

“Since we are just in the pilot stage of single sign-on integration, we are bearing our cost for the development on our side,” Snyder said. “But there is potential to incorporate as a subscriber service from the school’s perspective.”

Snyder said she would be “pleased” to launch the site at any school that is interested in CampusWall.

The company is currently working on developing a free mobile web app that will work on all mobile devices without a download.The app will simply detect the device, and accomodate for it.

Snyder gave us a sneak preview of what’s in the works, which you can see above.

“Honestly, I am overwhelmed and energized by the response,” Snyder said.” … I saw a need on the college campuses where my own children attend. I had no idea how widespread the interest would be. It seems like such an vital service to provide students — not only from a safety and savings standpoint, but from the sustainability side as well.”