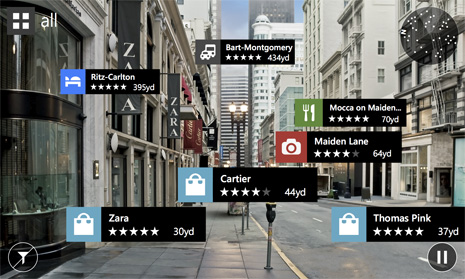 Getting driving and transit directions on Windows Phone can be an inconsistent experience, at best, but Nokia is making an attempt to improve the situation today by releasing its “Here” location apps to all Windows Phones. The apps — Here Maps, Here Drive, Here Transit and Here City Lens — are available now in the Windows Phone Store.

This is a balancing act for Nokia, which competes against other Windows Phone makers, including HTC and Samsung. Nokia is also making an outsized bet on the Windows Phone platform, and needs the larger ecosystem to succeed in the long run.

Nokia says in a blog post, “HERE works best with Nokia Lumia, but in a joint effort to further strengthen the Windows Phone ecosystem, Microsoft and Nokia are making HERE Maps, HERE Drive and HERE Transit available to people with any Windows Phone 8 smartphone. This exclusive offer is available in US, Canada, Mexico, UK, France, Germany, Italy and Spain.”

I’ve downloaded the Noke apps to my HTC 8X Windows Phone and will be trying them out this week, comparing them to the Google Maps experience on iPhone.

Nokia is touting the offline capabilities of its maps as one point of differentiation, but at first blush the integration of Google’s transit, walking and driving directions into a single app seems like a better experience to me. I’ll post more impressions after I spend more time with the Nokia apps.