Online streaming titan Netflix has a lot to be happy about.

This year, original shows that the company produced received 3 Emmy awards, including a Best Director win for “House of Cards” director David Fincher, the first time any show has won a Primetime Emmy without ever having aired on television first. “Orange is the New Black” is a critical favorite that has resonated with audiences, as well.

All of that added up to a solid third quarter for the company, which reported earnings of 52 cents per diluted share, a 300 percent increase year-over-year from Q3 2012, on revenues of just over $1.1 billion. Earnings per share exceeded analyst expectations of 49 cents a share, while revenues were in line with analyst expectations.

While the numbers show promise, the better news for investors is that Netflix is showing continuous growth in its subscriber base. As of today, the company has 40 million subscribers worldwide: 31 million in the United States, and 9 million abroad. Most significantly, that’s more paid subscribers in the U.S. than HBO has, or more accurately, had the last time they reported subscriber numbers.

Netflix is still behind HBO globally, something that CEO Reed Hastings addressed today in his letter to shareholders.

“We have done well but we have a long way to go to match HBO’s 114 million global member count or their well-deserved Emmy award leadership,” he wrote. “Title by title, device by device, member by member, award by award, country by country, we are making progress.”

Netflix credits the reception of “Orange” for its user acquisition, though interestingly, the company says that streaming of third-party shows from other networks makes up a far greater percentage of all streaming on Netflix. That’s not particularly surprising, considering Netflix has produced a small stable of shows compared to the rest of their catalog.

Following the news, Netflix stock soared to almost $389 in after hours trading, though Hastings (who has been discussed as a potential successor to Microsoft CEO Steve Ballmer) said that at least some of the rise in the company’s stock price is due to “euphoria.” The stock is up 283 percent this year and the company now has a market value of $20 billion.

“In calendar year 2003 we were the highest performing stock on Nasdaq. We had solid results compounded by momentum–investor-fueled euphoria. Some of the euphoria today feels like 2003,” Hastings wrote in the company’s letter to shareholders.

According to Hastings, Netflix plans to ignore its stock price’s fluctuations and focus on the business’s fundamentals. Here’s a closer look at Netflix’s numbers for the third quarter. 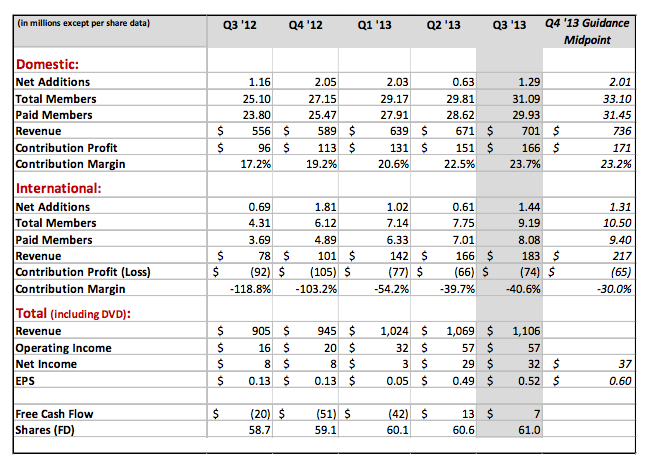