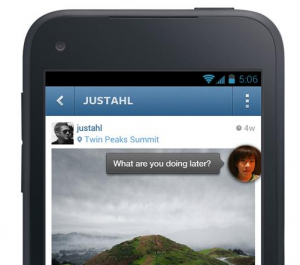 Microsoft is a longtime Facebook partner and investor, but that isn’t stopping the Redmond company from making some jabs over Facebook’s choice of Android for its new “Home” user interface — a replacement home screen centered around the user’s social network and friends.

In a post this morning, Microsoft communications chief Frank Shaw says he tuned into the Facebook Home announcement yesterday and found the presentation “remarkably similar to the launch event we did for Windows Phone two years ago.” He continues …

“Millions of Windows Phone owners have already discovered how great a phone can be when it’s designed this way, and they aren’t shy about telling their friends. Naturally, some of those friends have been pretty frustrated that they haven’t been able to get a “People First” experience on their devices.

“So, we understand why Facebook would want to find a way to bring similar functionality to a platform that is sadly lacking it.

“But as Android owners know, that platform is complicated enough without adding another skin built around another metaphor, on top of what is already a custom variant of the OS.

“So, while we applaud Facebook for working to give some Android owners a taste of what a “people-centric” phone can be like, we’d humbly like to suggest that you get the real thing, and simply upgrade to a Windows Phone.”

The real challenge for Microsoft is that Windows Phone, despite being out in front with this approach, hasn’t yet gained the market share to make it worthwhile for Facebook to even make its own Windows or Windows Phone apps. (Microsoft publishes the Facebook app for Windows Phone, and Facebook doesn’t offer a Windows 8 app, leaving it to Microsoft to integrate Facebook into Windows 8’s built-in People app.)

Android, on the other hand, is running away with the smartphone market, in terms of overall market share, so it makes sense that Facebook would target the Google platform for maximum impact, in a variety of ways. Sometimes good timing doesn’t mean being first.